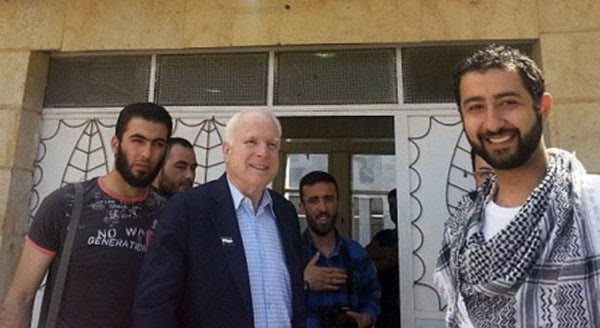 A newly declassified US Defense Intelligence Agency (DIA) report confirms that the US and other western governments allied themselves with al-Qaeda and other Islamic extremist groups to oust Syrian dictator Bashir al-Assad. They suspected the consequences of this tactic would lead to the rise of an “Islamic State.”

Judicial Watch obtained the previously marked “secret” DIA documents from August 2012 which show these“supporting powers” wanted a “Salafist principality” to emerge to “isolate the Syrian regime”. The goal to topple the Syrian dictatorship had such a high priority that these supporting powers continued to give comprehensive aid to opposition forces. The probability of a unifying of terrorist organizations in the form of a declared “Islamic State” didn’t halt the plans. As the document shows, the intelligence community predicted the development of a“proxy war” due to the support of Assad’s Syrian regime from “Russia, China, and Iran.”

Further, the documents show Al-Qaeda in Iraq (AQI) had “supported Syrian opposition from the beginning” due to Assad’s perceived targeting of Sunnis. This insurgency was attracting sectarian “volunteers” throughout the region. No differentiation was given to the characteristics of those sects, which naturally included Islamist extremists.

Despite the ultimate goal of ousting the Syrian dictatorship, the Intelligence Information Report states opposition would increasingly unite Sunnis in Iraq, Syria, and “the rest of the […] Arab world” for the purpose of jihad against their one common enemy — “dissenters.” Even though the documents explicitly state that various terrorist organizations would unify, “creat[ing] grave danger” for the unification and protection of Iraq and its territory, the US continued to support this opposition logistically, financially, and even militarily.

In July of 2012, CIA officials were in Turkey, actively helping to decide which Syrian rebel groups would receive arms financed by Turkey, Qatar, and Saudi Arabia. Though US officials claim they were not providing any weapons, those CIA officers were in place to oversee the supply chain consisting of Muslim Brotherhood, al-Qaeda in Iraq, and other “shadowy” groups. They were to ensure that arms would not fall into terror groups’ hands. This was part of the process of “vetting, and then shaping, an opposition that the U.S. thinks it can work with.”

In 2014, it was revealed that both Qatar and Saudi Arabia had been arming Jabhat al-Nusra, al-Qaeda’s Syrian group, and the Islamic State of Iraq and Syria (ISIS), precursor to the Islamic State. One Qatari official said of this revelation, “ISIS has been a Saudi project.” But they haven’t been alone in their efforts. Just last month, court documents revealed Turkish intelligence officials (MIT) had accompanied illegal shipments of arms to rebel-controlled areas of Syria and had “threatened police and physically resisted” a search of the transport truck, asreported by Reuters.

No matter the goal of aiding “moderate” opposition, arming extremists was precisely what was happening. Classified assessments of the situation in Syria, of which President Obama was acutely aware, indicated “most” of the arms “are going to hard-line Islamic jihadists, and not the more secular opposition groups that the West wants to bolster.” The following year, IHS Jane’s found that half the Syrian opposition groups were Islamist jihadists who otherwise shared the same mindset as al-Qaeda. The report’s author, Charles Lister, said, “The insurgency is now dominated by groups which have at least an Islamist viewpoint on the conflict. The idea that it is mostly secular groups leading the opposition is just not borne out.”

These extremist groups even began attacking the FSA and more moderate rebels, actively attempting to convert Syria into a hard-line Islamic state and regional Islamic “caliphate”. This is precisely what the 2012 documents predicted, and what the “supporting powers”, consisting of “the West, Gulf countries, and Turkey”, wanted to happen: “… there is the possibility of establishing a declared or undeclared Salafist Principality in Eastern Syria (Hasaka and Der Zor), and this is exactly what the supporting powers to the opposition want, in order to isolate the Syrian regime.”

After the EU lifted oil sanctions on Syria in 2013, in an effort to “help the civilian population and the opposition”, the reality of Western aid became clear. Al-Nusra began striking deals with Assad’s government to ensure profit from selling oil, confirming the conjecture by University of Oklahoma regional expert Joshua Landis that “[…] the logical conclusion from this craziness is that Europe will be funding al-Qaeda.” By the following year, EU ambassador to Iraq, Jana Hybaskova, complained to the Foreign Affairs Committee that “several EU member states have bought oil from the Islamic State terrorist organisation that has been brutally conquering large portions of Iraq and Syria”.

With the documents having circulated among the State Department, Central Command, DHS, CIA, FBI, and various other agencies, the ultimate goal of ridding Syria of the Assad regime seems to be questionable at best. Though support for the opposition seems to be the only acknowledged assistance in the effort, there has been no direct action targeting the Syrian dictator. In fact, after generalized US-led airstrikes caused mostly civilian casualties, FSA partner Harakat Hazm, issued a statement saying, “The only beneficiary of external intervention in Syria is the Assad regime, especially in the absence of any true strategy to bring him down.”

In reality, the US and its partners knowingly aided al-Qaeda and created the Islamic State, exactly as had been prognosticated and desired. At this point, the veracity of one axiom is shockingly apparent — “be careful what you wish for.”

This article (Declassified Pentagon Report Proves US Helped Create ISIS) is free and open source. You have permission to republish this article under a Creative Commons license with attribution to the author and TheAntiMedia.org. Tune in! The Anti-Media radio show airs Monday through Friday @ 11pm Eastern/8pm Pacific. Help us fix our typos:[email protected].