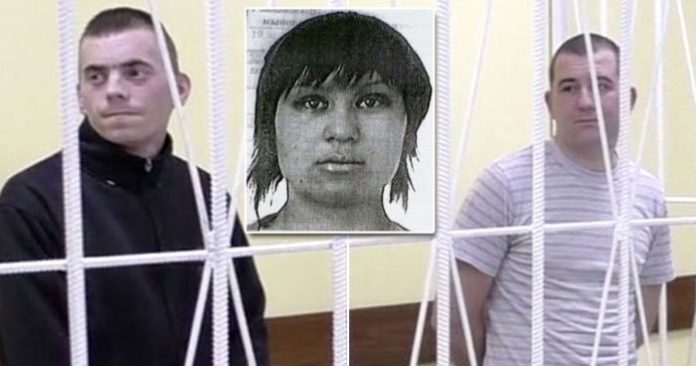 Local media have reported from the Russian city of Novokuznetsk, south-western Siberia, shedding light on a very disturbing incident that occurred in 2014.

According to the reports, two men, Kirill Nemykin and Sergey Metlyayev, invited a 31-year-old woman, Nadezhda Avakumova, to their home for some fun. It is said during the meeting with Nadezhda, the two men ensured that she was heavily drunk. After Nadezhda got drunk, the men reportedly escorted her to their sauna room where they took turns in having sexual intercourse with her. Afterwards, they left Nadezhda in the room. Sometime after the incident, Nadezhda woke from her drunkenness. She asked the men why they had sex with her without her giving consent, and had told them she hadn’t realized what was going on because of her intoxication. Local media quoted the police as saying that Nadezhda threatened to report them to the police for rape.

As Nadezhda continued to argue with them, the reports described how the men started to beat her. After severe beatings, they then dragged her from the room, locking her in an underground storage cellar at the home of one of the men.

Sensing extreme danger, Nadezhda started to bang and scream, pleading with them for help and mercy.  However, when Nemykin responded to her call, and opened the store, and when Nadezhda’s head appeared, he grabbed her hair and plunged a knife into her throat, killing her instantly. After murdering her this way, they pulled her lifeless body out, cut part of her body and cooked it. Later, they invited their friends for a party, serving the human meat to those who attended.

Prosecutor Prodchenko said although those attending the party were drunk, they were still utterly shocked about what they were witnessing – especially when Metlyayev started eating what he was cutting.

“He took her cut off leg and walked around the house showing it to everyone, laughing and smiling. Women at the house were shocked despite being drunk. Metlyayev started eating the human meat and offering it to everyone to try it,” Prodchenko told the court.

After the party was over, the men packed the remains in plastic bags and dumped them in bins at the end of the street, not far from where they lived.

Although the police made frantic efforts to apprehend the perpetrators of the heinous crime after discovering the body, the police were unable to make any arrests. It took two years before a girlfriend of one of the men voluntarily went to the police to narrate the disturbing story. The police immediately arrested the two men. During interrogations, the men admitted to committing the crimes. The police, thereafter put them before a court of law.

After the hearing, the court surprisingly sentenced the men to only 12 years in jail for raping, killing and eating their victim.

The court also ordered Nemykin to pay a fine of 800,000 rubles ($8,500) as compensation to the mother of the victim. Local residents have heavily criticized the ruling, saying it is unacceptable for cannibals who have committed such as crime, to be given this lenient sentence.

Local activists have planned to protest in solidarity with the family of the victim, and also press for a review of the ruling, so the bereaved family can finally have their justice.

This article (Men Rape, Kill and Eat the Flesh of a Woman, Court Sentences Them to Only 12 Years) is a free and open source. You have permission to republish this article under a Creative Commons license with attribution to the author and AnonHQ.com.