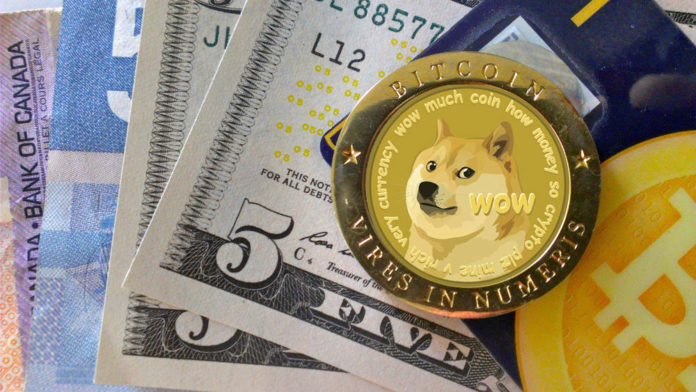 Ok… so, what the heck is Dogecoin?

“Dogecoin is a decentralized, peer-to-peer digital currency that enables you to easily send money online. Think of it as “the internet currency.”*

Well, sort of. It’s a crypto-currency designed for “monetary transactions to be possible without going through a bank or other financial institution”.

In other words… There’s no one person or company in charge and there’s no middleman or bank to take a cut of the precious few sheckles you have. The whole technology really isn’t that complicated. To put the basics into a milk jug sized description… Let’s say you get a new credit card. You lock up that card in a safe place and never physically touch it. You can still use it right? Certainly! (if you can remember the numbers on it) you can use it on the net, at the grocery store…the whole world. Crypto-currencies are not in dollars, Yen, Pounds Sterling or any other titled currency other than it’s own namesake but, they do have an exchange rate. Bitcoin, Litecoin & Peercoin are some others that were or are in the mix right now also.

What’s the difference? Or, are they all the same?

Glad you asked! From the information found so far (after trying to decipher chaos in my head created by all the fine details of these systems) They all boast that transactions are completely safe and anonymity is protected. Anyone can use them, fees are nominal… blah blah blah.  It would seem that the two biggest differences are the cost of transactions and the time it takes to verify them as being done, accepted etc… The one thing that really sets Dogecoin apart from the others is… *drumroll please* …. Dogecoin was created by a charitable organization along with co-creator Jackson Palmer and continually raises money for anything from Olympic athletes to the creation of drinking water systems in Kenya and is also raising money to train service dogs for children with special needs. Take THAT Bitcoin! NYAH!

Comparable to the other online currencies, there is supposedly no “owner” or any single entity that has or can control the currency system.** This tech finds that really hard to believe. I compare that statement to someone telling me that computerized slot machines are completely random (well, except for that data cable that connects them to the mainframe) Unlike the other systems, it seems to have been designed for the everyday Joe or Joanne type of person. The transactions are claimed to be faster and less expensive than other systems on Dogecoin. They go so far as to say this right on their website “Dogecoin is cheap and readily available to the general public. Thus, it is clear that Dogecoin will become the go-to option for average consumers”*

Mom, Pop, Grandma, kids, neighbors and even doges can use this affordable alternative that has nowhere to go but up in the world. All debauchery aside… The question that pops to me first?  Is this the paved road to the new reality of a one world currency or will banks themselves band together to create their own system and make the same claims while skimming off the top of hundreds of thousands of transactions? My guess, Probably. World of “Blade runner”*** here we come!  Inevitably money is the reason things are done by a really high percentage of people in our world.  In this particular instance? We can go back to the old comparison of quantity vs quality. The percentage of middle and lower class earners is a heck of a lot higher than the high end. What’s easier in the hyperactive world of high speed computing? getting $1000 from 10 people or $.10 from 100,000? $.01 from 1,000,000?

Only time can answer these questions for us. Do or don’t do? Like or not like? There isn’t much we can do to stop it except for inventing something better. The only way for that is think together, work together and accomplish things together. We are Anonymous, we are one and we are strong!