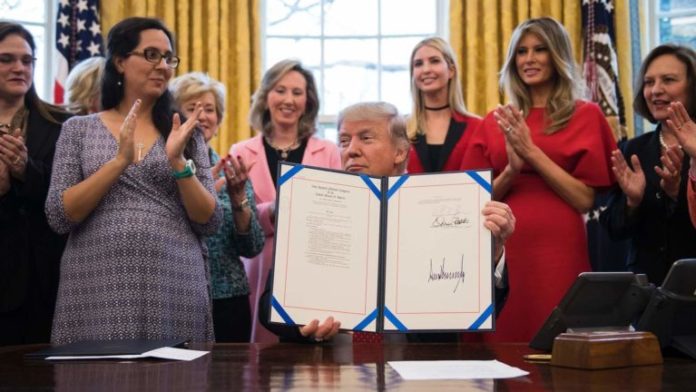 February 2017 ended on a positive note, as Donald Trump used his power as President to sign two bills which are designed to recruit more women into science, technology, engineering and mathematics (STEM) jobs. At the Oval Office, Trump mentioned that it is unfair that only 1 in 4 women with a degree in one of these areas works in the field.

The first bill, HR321, authorizes NASA to actively ramp up its attempts to recruit and encourage more young women into going into STEM careers. It also requires the space organization to report to Congress on its plans for achieving the goals outlined in the legislation.

Bill HR 255 authorizes the National Science Foundation (NSF), the source of nearly one-fourth of all federally supported scientific research, to boost its recruitment efforts. Females who graduate in STEM subjects will be assisted in taking up STEM careers, particularly in the worlds of both academia and industry.

Though some fine details of the bills are somewhat lacking, both received bipartisan support in Congress, reports the Chicago Tribune.

As IFLScience points out, in 2012, a US census discovered that just 25% of men and women with a bachelor’s in a STEM subject find work in a STEM field. The main issue seems to be the lack of funding and career support for science-based fields.

Though a handful of executive orders signed by President Trump have outraged populations within the U.S., this latest move is being applauded by nearly all.

This article (Donald Trump Signs Bills Targeted At Recruiting More Women In STEM Careers) is free and open source. You have permission to republish this article under a Creative Commons license with attribution to the author and TrueActivist.com