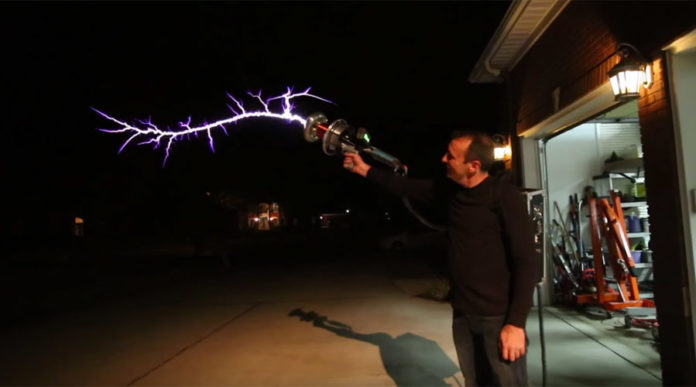 “Power can be, and at no distant date will be, transmitted without wires, for all commercial uses, such as the lighting of homes and the driving of aeroplanes. I have discovered the essential principles, and it only remains to develop them commercially. When this is done, you will be able to go anywhere in the world — to the mountain top overlooking your farm, to the arctic, or to the desert — and set up a little equipment that will give you heat to cook with, and light to read by. This equipment will be carried in a satchel not as big as the ordinary suitcase. In years to come wireless lights will be as common on the farms as ordinary electric lights are nowadays in our cities.” — Nikola Tesla

Cameron Prince — a hardcore Nikola Tesla fan and founder of The Tesla Universe, a website that supplies Tesla coils, Tesla guns, and Faraday Suits to rent — has turned one of Tesla’s famous inventions — the Tesla coil — into a handheld (and homemade) gun — described as the Tesla Coil Gun. It draws power from a huge, water-cooled backpack crammed with electrical bits.

The epic device, featured on U.S. engineer Destin Sandlin’s popular YouTube channel Smarter Every Day, is a transformer circuit that pumps out AC electricity in high voltages, spider webbing through the air like lightning. It has a built-in display and control panel, along with various settings to change the size and range of the electricity emitted by the gun.

“This is full on Ghostbuster stuff. The primary coil on a Tesla coil circuit [is] fatal, no questions asked, but on the secondary coil the output is in micro amps, which is generally accepted to be safe but some people still say it’s dangerous. Here’s the deal, do not do this,” Sandlin warned after he allowed himself to be struck by streams of electricity coming out from the gun.

Nikola Tesla developed the Tesla coil in 1891 — before conventional iron-core transformers were used to power lighting systems and telephone circuits — to wirelessly transfer bolts of electricity.

Here’s a demystifying of the Tesla coil:

“The Tesla coil is one of Nikola Tesla’s most famous inventions. It is essentially a high-frequency air-core transformer. It takes the output from a 120vAC to several kilovolt transformer & driver circuit and steps it up to an extremely high voltage. Voltages can get to be well above 1,000,000 volts and are discharged in the form of electrical arcs.

“Tesla coils are unique in the fact that they create extremely powerful electrical fields. Large coils have been known to wirelessly light up florescent lights up to 50 feet away, and because of the fact that it is an electric field that goes directly into the light and doesn’t use the electrodes, even burned-out florescent lights will glow.”

Did you ever imagine Nikola Tesla’s revolutionary resonant transformer, better known as a Tesla coil, could one day be turned into a portable, wearable weapon called the Tesla coil gun? Please share your thoughts in the comments section below…

This article (Engineer Turns Tesla’s Invention into Handheld Coil Gun That Blasts out Arcs of Lightning) is a free and open source. You have permission to republish this article under a Creative Commons license with attribution to the author and AnonHQ.com.