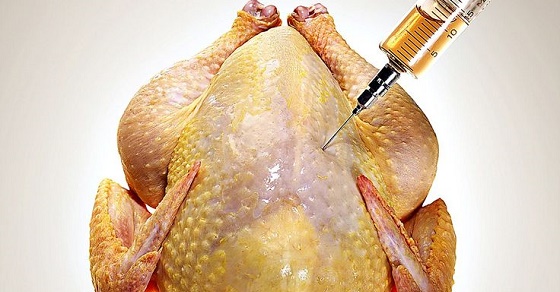 The FDA has finally admitted to chicken meat sold in the United States contains arsenic; a known carcinogenic that’s fatal in high doses. Its own research demonstrates that the arsenic laced feed given to chickens ends up in the chicken meat, and thus consumed by humans.

The original story given to the U.S. citizens over the last 60 or more years is that arsenic fed to chickens was “excreted in the chicken feces,” presenting no risk to those who consume chicken meat. Now that the research has gone public, manufacturer of the chicken feed product Roxarsone has decided to pull their product from the shelf.

The company of Roxarsone is a subsidiary of Pfizer – a name you may have heard of before when vaccinating your children. Pfizer’s subsidiary Alpharma LLC have in the past defended their use of arsenic strenuously, as have others. Although Alpharma have decided to pull their product from U.S. shelves, Pfizer and Alpharma will continue to sell overseas, deciding on a case by case basis the actions that will be taken.

What’s more concerning is the FDA admittance of the bird containing carcinogenic material, the deputy commissioner for foods, Michael Taylor, reassured the public that “concerns of a very low but completely avoidable exposure to a carcinogen.” The National Chicken Council also added to the growing concerns surrounding the consumption of chicken meat. “Chicken is safe to eat.” It promotes growth in chickens and has been used for many years, they said in their industry’s defense.

The pulling of Roxarsone isn’t a solution to the problem. The European Union has had a ban on similar products for years. Michael Hansen, from the Consumers Union, gave a press release on the growing concern. “There are several other arsenic-containing drugs for animals that are on the market, and those should also be withdrawn or banned, as they have been in the European Union.”

Meanwhile, the FDA has played hardball with those profiting from elderberry juice and raw milk, chasing anyone selling these natural products, saying they’re bad for our health; accusing distributers of soliciting these “unapproved drugs.”

This Article (FDA Plays ‘Chicken’ with our Health, Insists Arsenic Traces Okay) is a free and open source. You have permission to republish this article under a Creative Commons license with attribution to the author AnonWatcher and AnonHQ.com.