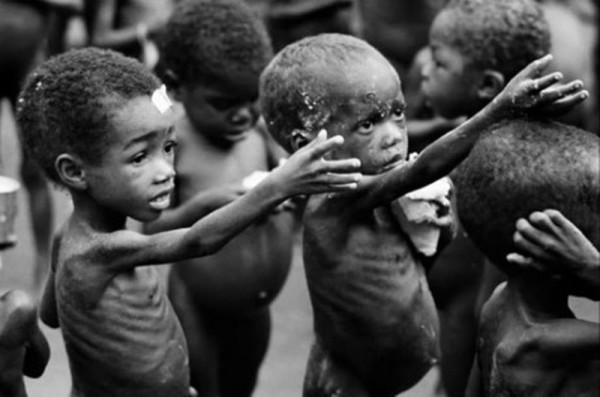 In many developing countries, extreme poverty is widespread among the majority of the population. In many African countries for example, it is only the few elite who are enjoying the limited resources of their respective countries.

In rural communities in developing countries, extreme poverty is real. People living in these communities predominantly engage in subsistence farming to feed their families. The grow crops and rear domestic animals for their households consumption. These activities heavily depend on the weather, needing rain to water their crops; and for the natural grass to grow so that their livestock can feed on it to flourish. Therefore, in an event where there is a failure of rain due to the rapid changing of the weather patterns, families are in severe crisis. They cannot feed themselves, allowing hunger and malnutrition to devastate children. These result in many avoidable diseases, which further complicate the situation.

Over the few years, governments, organizations and benevolent individuals, mostly from the West, have tried to find solutions to end extreme poverty in the developing world. Western scholars have propounded a development theory which seeks to explain why some countries are poor; offering suggestions on how these poor countries can break-away from poverty. Although some Marxist scholars, from Latin America have countered the argument of Western scholars by putting forward an alternative theory, the academic battle between the two sides focuses on how poor countries can grow to become productive, empowering their citizens to achieve both social and economic growth. Apart from these development theories, especially for western governments and so-called non-profit organizations, giving aid to developing countries was thought to be another solution to eradicating poverty. But over the years, aid to the developing countries has proved ineffective. Critics of western aid to developing countries say western nations use aid as a tool to take more away from these  countries than what they give out. For example, according to a research conducted by a coalition of NGOs, and published by the Guardian, western countries use aid to exploit Africa. The study reported that Africa loses nearly $60 billion a year through tax evasion, climate change mitigation, and the flight of profits earned by foreign multi-national companies on the continent. The continent receives $134 billion each year in loans, foreign investment and development aid from western countries, yet $192 billion leaves the continent each year. To make matters worse, aid given by the western countries does not even get to the right people who are supposed to receive them. The small elite at the top tend to embezzle such monies.

This new approach is radical. Identify the poorer of the poorest, and give the aid directly to them instead of giving it to government agencies (or organizations), that will end up embezzling the funds.

The researchers have already started testing their research in Kenya, Africa. The researchers have identified the very poorest in Kenya, and are giving cash directly to them so that they can do whatever they like with it in order to improve their living. The project is named GiveDirectly. The monies are given to community members unconditionally, with no strings attached. Recipients are free to do whatever they like with the money. So far, the GiveDirectly project has given out more than $6 million to poor rural communities in Western Kenya.

“It is more respectful for someone to give me the cash and let me use it the way I wish. Maybe you give me maize seeds, but I wanted to plant cabbage. Maybe I’ll plant them because you gave me the seeds free of charge, but I won’t put as much effort so maybe I won’t even achieve what you want. But the thing that is in my mind, I will achieve. Poultry will fetch me money very fast if I maintain it properly,” a beneficiary of GiveDirectly-Victor Ochieng, a local resident in the village of Nyawita-Kenya told the Take Part. Nyawita is part of the villages in Kenya where the GiveDirectly project is being tested. Ochieng also revealed how the money he received from the GiveDirectly project has helped him purchase pumps and pipes to irrigate his crops during the dry seasons. He said “Farming has so many challenges, and one of the biggest is that rains disappear. I wanted to farm even during the times of drought, so I could take my crops to the market while the price is high.”

Although there are challenges, the GiveDirectly project is gradually proving to be the most effective way of getting aid to the people who need it. Many are hoping that it will soon become the new model for eradicating extreme poverty in poor countries.

This article (Fighting Poverty: The Radical Approach to Ending Extreme Poverty in Developing Countries [Video]) is a free and open source. You have permission to republish this article under a Creative Commons license with attribution to the author and AnonHQ.com.