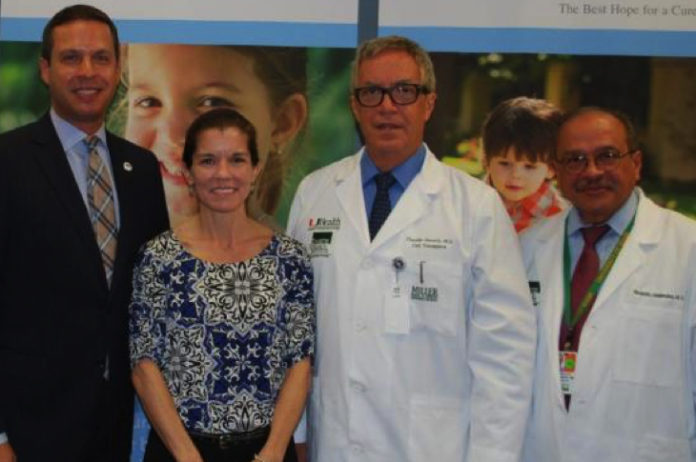 In a new clinical trial to observe a new method of injecting islet cells into a patient with Type 1 diabetes, doctors from the University of Miami’s Diabetes Research Institute have confirmed that their first trial patient no longer needs insulin therapy.

Wendy Peacock, their first patient, has been giving herself insulin injections and following a strict daily schedule to take care of her diabetes since she was diagnosed with Type 1 diabetes at 17. Now 43, Peacock has undergone the surgery in this new trial and no longer needs injections because her body is producing insulin naturally. Since the minimally-invasive procedure in August 2015, she also no longer has the dietary restrictions that coincide with having Type 1 diabetes.

Type 1 diabetes is caused by the body’s own immune system, which is supposed to attack harmful bacteria and viruses, and instead attacks insulin-producing cells, or islet cells, that work in the pancreas. Once too many islet cells are destroyed, the body will produce little to no insulin, which is needed to decrease the amount of sugar in the body’s bloodstream. The insulin allows the sugar to enter into cells rather than stay in the bloodstream, but if all of the sugar remains in the bloodstream, it can cause life-threatening complications.

In this new diabetes trial, doctors have formed a new method of injecting the islet cells into the body. Instead of injecting them into the liver, which has been done in previous experiments and proven effective for a certain period of time, the doctors inject the cells into the omentum to create a more permanent solution. The omentum is a tissue that wraps around the abdominal organs, and the cells are delivered into this tissue with a biodegradable scaffolding. The scaffold is produced by mixing the patient’s own blood with thrombin, which is a chemical used in surgeries to control bleeding. Thrombin and the blood form a gel-like substance that sticks to the omentum and keeps the islet cells, normally at risk for being rejected or dying, in place. As the gel absorbs into the body, the islets receive oxygen and nutrients necessary for them to start doing their job of producing insulin. Anti-rejection therapy is used with all of the current patients for this trial so that the body accepts the islets in the long term.

This clinical trial is one part of a broader goal to create a BioHub, which is a bioengineered “mini” organ that is meant to mimic the functions of the body’s pancreas in order to effectively cure diabetes.

While this is still not a cure, this is a huge step in the right direction for those living with Type 1 diabetes. Dr. Camillo Ricordi, the director of the DRI and a professor of biomedical engineering, microbiology, and immunology at the University of Miami, said of Peacock, “She is like a nondiabetic person but she requires antirejection drugs. When you can do it without antisuppression, then it’s a cure.”

As for Peacock, she is still processing what life without diabetes is like. She said, “As any type 1 knows, you live on a very structured schedule. I do a mental checklist every day in my head — glucose tabs, food, glucometer, etc. — and then I stop and say, ‘WOW! I don’t have to plan that anymore.’ It’s surreal to me. I’m still processing the fact that I’m not taking insulin anymore.”

What do you think about this new trial’s results? Comment your thoughts below and share this article!

This article (First Patient In Diabetes Trial Is Now Diabetes-Free) is free and open source. You have permission to republish this article under a Creative Commons license with attribution to the author and TrueActivist.com