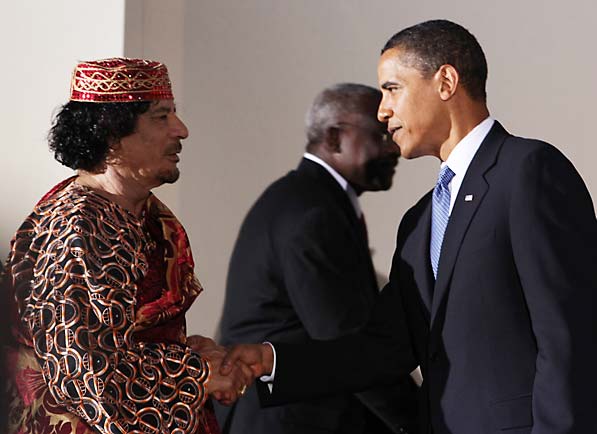 In August of 1971, Richard Nixon untied the last string between gold and the U.S. dollar in order to export inflation to Saudi Arabia after they promised to accept oil payments in dollars.  The reason governments do not like a currency that is backed by a commodity, is that it limits the number of dollars they can print, then spend, without having to actually take more dollars out of the taxpayers’ pocket.  Without physically redistributing your wealth, they print more paper currency which diminishes the purchasing power the dollars in your wallet now are redeemable for.  Overtime this hurts those with fixed incomes, and those saving for retirement, who now have the same number of dollars; but now must spend them after the market has adjusted for the price increase from the new money supply. In 2011, it became apparent that Muammar Gaddafi in Libya was attempting to develop a currency that can compete with the Dollar or the Euro.  The International Monetary Fund estimates Libya has 144 tons of gold currency (the gold Dinar) in its vaults.  An oil rich country like Libya is much less likely to enter a contract in which the currency they receive in exchange for their oil; due to the likelihood that the currency will quickly depreciate in value rendering long term savings obsolete.  Knowing an oil rich nation would not accept a depreciating currency in exchange for oil and natural gas, the U.S. government had every incentive to assist the rebels in Libya’s 2011 civil war. The history between the U.S. and Libya goes back to the 1986 Libyan government under Gaddafi executing the Berlin discotheque bombing, and the U.S. retaliated by bombing the country, then again in 1988 with the Lockerbie bombing.  Most recently in 2011, the U.S. took part in a military intervention alongside the anti-Gaddafi rebels, aiding them with air strikes against the Libyan Army.  According to a 2012 Gallup poll, 54% of Libyans approve of U.S. leadership, compared to 22% towards China, and 19% towards Russia.

These wars and military interventions are the very health of the state.  Wars allow governments to print, spend, and spy on their citizens, propagandizing the threat it has on our safety. The more governments spend other people’s money sending other kids to go fight, they fool the American citizen into the belief that it makes them safer.  The reality is, as an American citizen you are eight times more likely to be killed by a police officer than a terrorist.  And since the September 11th attacks on the World Trade Center resulted in 2,977 deaths, there have been over 5,000 U.S. citizens killed by a Federal or State police officer.

Countries do not attack countries, governments attack governments.  Since the Egyptians, Assyrians, Babylonians, Romans, etc. governments have sought war to conquer land, and make the citizens of the new land taxpayers.  There is no logic in assuming all the bad guys happen to be born in the other countries, or at different periods in time, they exist today and are in our government.

So long as people legitimize the Leviathan like state that monopolizes the use of force on a given geographical territory, it will be a magnet to those who want power of others as history has shown time and time again.  Governments monopolize currencies so they are universally exchangeable, print whatever they’re unable to tax, then devalue the ability for the citizens to have a sound exchange once the dollars trickle down to them and prices have risen as a result of inflation.  Citizens get the jobs, create the wealth, products, and services to purchase while acquiring monies in exchange.  Once there has been something of value created by individuals voluntarily cooperating, governments print the monopolized currency until it’s valueless.

Therein lies the reason the U.S. government had an interest in assisting a Middle Eastern rebel group while their subjects at home paid the price.