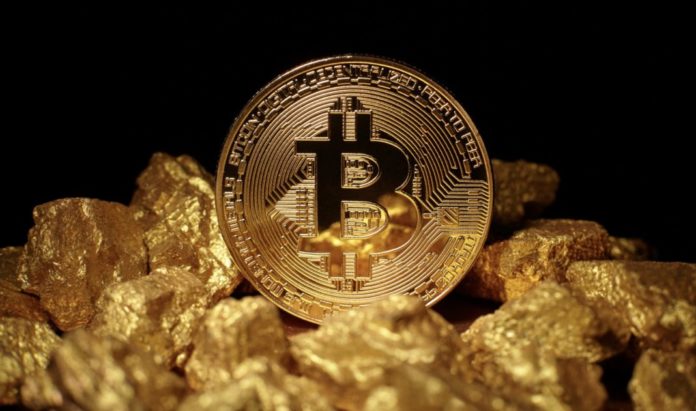 Perhaps the most obvious difference between Gold and bitcoin is this: Gold is physical and bitcoin is digital. Yet the distinctions between the two run much deeper.

Gold is a Precious Metal used by mankind as a medium of exchange for millennia. It is also useful in technology and manufacturing, and is appreciated for its beauty in the form of jewelry, art and keepsakes. Gold is widely regarded as a sound long-term investment and a hedge against market volatility.

Bitcoin, on the other hand, is a coded, crowdsourced currency that did not exist until 2009.

Bitcoin is the world’s first decentralized digital currency. This novel system for virtual money was first proposed by software developer Satoshi Nakamoto in 2008 and made available to the public in 2009. This system allows members of the bitcoin community to mine new bitcoins using open-source software to solve complex mathematical equations. The total supply of bitcoins that can ever be mined is capped at 21 billion. A bitcoin is represented by the record of its transactions between different addresses. Addresses consist of randomly generated sequences of letters and numbers. Users purchase bitcoin by using another sequence in the form of a private key that is kept secret. Miners must verify all bitcoin transactions.

BENEFITS AND RISKS OF BITCOIN CURRENCY

Bitcoins provide users with a unique trading experience. Unlike the American dollar and British pound, bitcoins are not regulated by a single central bank. In theory, this means the virtual currency is decentralized, democratized and can be accepted anywhere in the world. It also means that bitcoins are unregulated, which can open the door to corruption.

In recent years, power struggles between key creators and traders have disrupted the bitcoin market. By the end of 2015, Chinese bitcoin miners controlled more than 50 percent of bitcoin currency creation, which significantly slowed the speed of transactions for non-Chinese users, the Washington Post reported.

Bitcoins do not carry any personal identifying information such as names or physical addresses. The currency’s potential for anonymous transactions made it particularly attractive on the black market. The Silk Road website, which was used to sell millions of dollars in illegal drugs and illicit goods, accepted only bitcoins. The website was shut down by the FBI in 2013 and its creator was prosecuted, the New York Times reported.

Because bitcoin is crowdsourced, its value is dependent on community participation. In its early years, bitcoin benefited from an enthusiastic base of developers and investors. Its popularity has since faded. In early 2016, Mike Hearn, a prominent bitcoin developer, declared the currency a failure and announced he had sold all of his bitcoins.

“It has failed because the community has failed. What was meant to be a new, decentralised form of money that lacked ‘systemically important institutions’ and [was] ‘too big to fail’ has become something even worse: a system completely controlled by just a handful of people,” Hearn stated in a blog post.

As with any commodity, including Gold, bitcoin is subject to drastic price fluctuations. Between 2009 and the majority of 2013, the bitcoin price rose gradually from zero to near $200. The value of bitcoin then rose sharply to $1,242 in November 2013, nearly surpassing the price of Gold, which was trading around $1,250 an ounce, CNN Money reported. During the bitcoin price spike, dozens of websites launched to facilitate bitcoin investment. At the same time, bitcoin investing captured an enormous amount of attention in the media.

As more users chose to invest in bitcoin, miners worked to increase the worldwide supply and developers imposed higher transaction fees. Bitcoin could not maintain its peak price. Between the end of 2013 and the beginning of 2016, bitcoin’s value steadily decreased to less than $400.

Hearn stated in his blog post that investing in bitcoin was never guaranteed to yield returns. “Bitcoin is not intended to be an investment and has always been advertised pretty accurately: as an experimental currency which you shouldn’t buy more of than you can afford to lose,” he explained.

Similarly, market pressures drove the Gold price to historic highs between 2011 and 2013, exceeding $1,900 an ounce in September 2011. Prices remained above $1,000 an ounce into 2016. While Gold prices have responded to supply and demand, fluctuations are less extreme than many other investment commodities, including bitcoin.

It is also important to note that Gold has demonstrated reliability. Civilizations have traded Gold since roughly 600 B.C. and it continues to be used by dealers and investors with great enthusiasm today. Gold is also sure to never lose its intrinsic value as a Precious Metal with numerous practical applications.