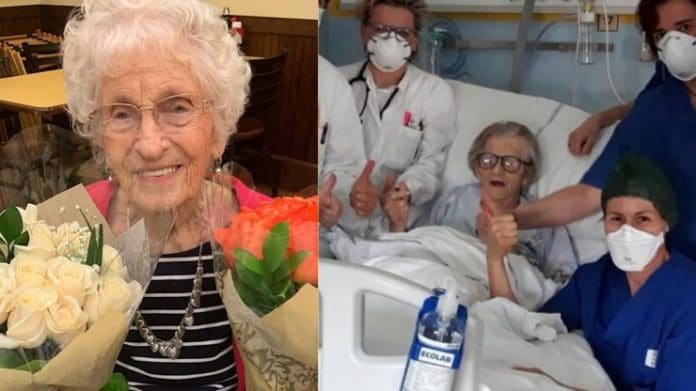 Maybe living through war and depression strengthens the spirit. Even with the coronavirus, we’re seeing survivors in their 80s, 90s, and even in their 100s.

A global pandemic is often compared to a war, both in terms of the efforts required of millions of people to overcome a deadly threat, as well as the suffering it can inflict on society.

For the elderly, the comparison is quite appropriate: after all, while many of us are feeling the intense pressures of two months of sheltering at home, those belonging to the “Greatest Generation” faced major disruptions in their lives, ranging from spending time in the military to facing rations, displacement, and other challenges such as loved ones lost in a war, weddings placed on hold, and long-term plans being suddenly upended.

And guess what? Those who faced the tragedies and hardships of the past are still with us today, and they may have some lessons to teach us.

Lucille Ellson of Orlando, Florida, was born on Dec. 30, 1917, just as the Spanish Flu began emerging from the barracks and camps of the U.S. and European military camps of the First World War. At the ripe age of 102, she heard tales of how her uncle and father contracted the deadly flu pandemic only to survive, just in time to face the Great Depression. And that, too, she survived.

And when she was finally supposed to get married in 1942, the attack on Pearl Harbor happened. Her fiancé Floyd enlisted in the Navy to join the fight, putting her marriage on hold. But a few years later, Floyd returned home after being honorably discharged – and the two finally got married and started a family.

Ellson isn’t the only living proof that living through war and depression can strengthen the spirit. While a disproportionate amount of those lives lost to the pandemic have been elderly, many octogenarians, nonagenarians, and centennials have also survived the disease.

In March, 95-year-old Italian grandmother Alma Clara Corsini became a symbol of hope after recovering from the virus, becoming one of the oldest people in the country at the time to survive COVID-19. Her good fortune was celebrated and shared with the world by no less a figure than Pope Francis himself.

Since then, another Italian grandmother, this time 104 years old, has also beaten back coronavirus. Ada Zanusso, who was living in a nursing home in Northern Italy, had developed a high fever and shortness of breath before she tested positive for the virus. But the centenarian was able to recover with no loss of her intelligence or lucidity, according to medical staff.

Another recent example comes from the U.K., where 99-year-old Carrie Pollock recovered after a long stay in the hospital following a coronavirus infection. Pollock, who once worked in the British Special Branch, was admitted to Queen Alexandra Hospital in Portsmouth after experiencing hallucinations and suspected pneumonia. However, she has since recovered and returned back to her home, but not before inspiring the hospital staff who rescued her.

“These are worrying times for many and to see her leaving hospital after recovering from COVID-19 gave the staff a real boost.”

“She is an absolute fighter and we are so proud that she has done so well. She is already back at home and walking to strengthen her legs again.

“She loves her talking books and loves a natter. She is an inspiration to our whole family. The hospital staff did an amazing job to care for her and nothing was too much trouble. We were able to call her when she was in isolation which was lovely.”

Rita Reynolds, a grandmother from Liverpool, also survived at 99, coming in for a tie with Pollock for the honor of being one of the oldest British survivors of the virus.

And then there’s Cornelia Ras, a 107-year-old Dutch woman whose recent birthday celebration on March 17 was followed the next by the symptoms of COVID-19. Against all expectations, Ras was able to beat back the illness and is currently “perfectly healthy.”

A day after her 107th birthday, Cornelia Ras fell ill with #covid19. We are happy to announce that she has fully recovered! pic.twitter.com/V9Yy3MKhYi

We’re not medical experts, but we’re hopeful that something about these strong women, mothers, and grandmothers enabled them to bounce back from this frightful pandemic. And we have no doubt that their past experiences in worrying times helped them through this ordeal.

For Ellson, the math is easy:

Ellson also has a simple lesson for those who are anxious about the current pandemic. She told Washington Post:

“I’ve been through so many things… To cope with this virus, and all that’s going on, I would tell people to not get stressed about planning far ahead.

“You can’t do it. A long time ago, I started making a list every morning of what I had to do. It was the only thing I could control, and I stuck to it, you hear me?”