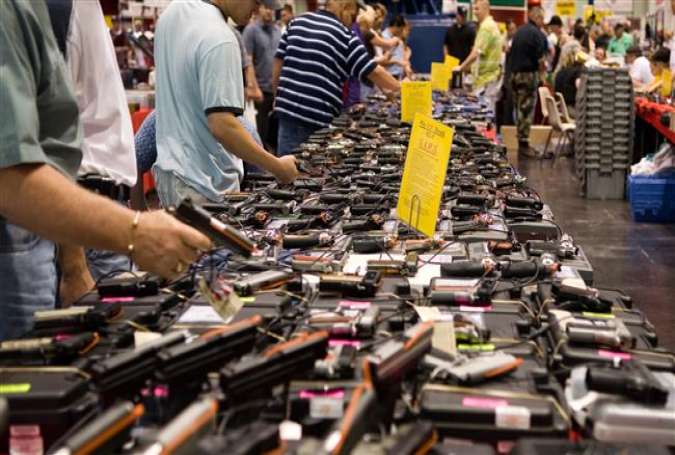 While the rest of us are stricken with the horror of our most recent tragedy, the Orlando massacre at the Pulse Nightclub, gun manufacturers are reaping surging profits. It should be no secret that gun sales spike around election times and after mass shootings. The fear that the incoming ruler will take your guns as well as that mass shooting inspired legislation will do the same causes many people to rush out and stock up. We all know that neither of those is true. Obama came to town and was a seeming blessing for gun manufacturers who cashed in on people’s fear. Nearly all the legislative attempts to implement gun control are derailed by the National Rifle Association and their army of lobbyists. Nevertheless, while we continue to die and politicians continue to bicker, gun manufacturers continue to bask in their own success. Recent statements from gun manufacturer and distributor execs including Michael Fifer, CEO of Sturm, Ruger & Co., and Smith and Wesson CEO P. James Debney both confirm this. The gun industry appears to have no qualms about cashing in on America’s unique problem. Fifer stated during a company meeting in regards to their surge in sales surrounding last year’s mass shooting attacks, “was strongly correlated to the tragic terrorist activities in Paris and San Bernadino.” Fifer also anticipated that a democrat winning the White House would also lead to a spike in sales over fears of a liberal supreme court. Debney later stated at the UBS Global Consumer Conference that “back into the world of politics, talking about increasing legislation in gun control, which no doubt encouraged a very strong buying period.”

While the figures aren’t yet in, we can anticipate the spike in gun sales to mirror the spike after Newtown. The largest gun manufacturers all saw significant spikes in sales in the months following Sandy Hook. Smith and Wesson, like all other gun manufacturers, has seen spikes in sales after every “terrorist” attack or mass shooting. They went from approximately 600,000 guns sold per month just before 9/11 to over 754,000 guns per month. After Obama’s election they jumped to 1.1 million guns per month. After Sandy Hook they again moved up the charts to over 2 million guns sold in January 2013. Sales leveled out at around 1.2 million guns per month by November of 2015. How high will they go now?

Industries like the cigarette industry and the gun industry are forged upon death. They cannot succeed unless human beings die. It is an unfortunate truth that me must find a balance between our own individual freedoms and the freedom of industries to peddle their nefarious wares. There are currently more firearms in the United States than there are men, women and children to fire them. It would seem that to attempt to limit gun sales through legislation at this point is pouring a glass of water on a raging fire; ineffective at best. At the moment, no one has a solution to this problem. But all the while, the flow of guns will continue to spill the blood of innocents while fatcat gun manufacturers continue to reap the benefits.