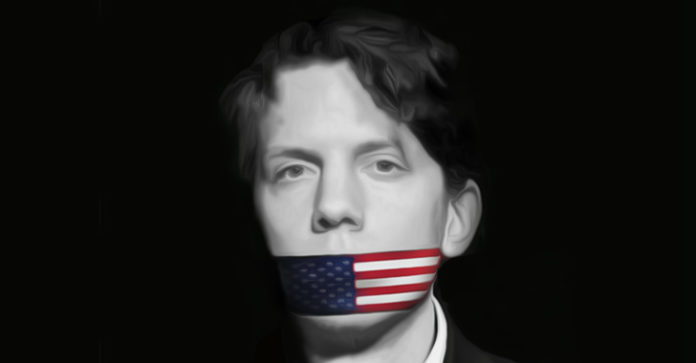 Typically the custom for celebrating somebody’s birthday is to give that person gifts, and typically when one thinks of children’s book publishers, they don’t think of Anonymous. But for Jeremy Hammond’s 30th birthday this year, the typical rules didn’t apply.

Thursday, Jan. 8, 30 parcels were sent out to their various destinations all around the world. The exterior of the boxes bore Anonymous logo stickers reading: “We never forget his name is Jeremy Hammond. With love from Jeremy Hammond on his 30th Birthday.” Inside, the boxes each held a copy of a children’s book, The Parade with the Drums, written by H.S. Breachwall, illustrated by Wenzel, and published by Anonymous Publications. The picture book details a child’s encounter with a protest.

“In the real world, large organizations have an influence on us as individuals. Sometimes this influence is welcome and beneficial. Sometimes this influence can be harmful and corrupt,” reads a synopsis on the back cover. “When members of a society come together and reach a consensus that a ‘global influence’ is proving harmful to society, steps can be taken towards dismantling this harmful influence and improving the wellbeing of the population as a whole. These are complex ideas, but just because they are complex does not mean they are unimportant or impossible to express to our young. This picture book is an attempt to express these ideas through a context that our children can understand.”

AnonLit, the collective behind Anonymous Publications, came up with the idea of gifting 30 books – one for each year of Hammond’s life – to people around the world, instead of attempting to give Hammond gifts he may or may not receive whilst in prison. The initial 30 books were such a hit that the group sent out an additional 28 subsequently.

“The 30 books represented on book for each year Jeremy has been alive. Initially they were sent to Jeremy’s mom and brother Jason, Jeremy’s friends, Jerry Boyle, an attorney and dear friend to Jeremy and Jeremy’s trial attorneys,” Hammond supporter Sue Crabtree told The Cryptosphere. “But soon we thought that perhaps we could get these books into libraries. And we started reaching out to people who in fact got permission to get the books into libraries all over the world including Austria, Spain, Norway, and the Netherlands. The books are also heading to libraries throughout Chicago and many states in the U.S.”

The hope is to eventually compile photographs of everyone with their copies of the book into a collage to give to Hammond.

Hammond is currently serving a ten-year prison sentence in the Manchester Correctional Institution in Manchester, Kentucky for hacking Statfor, a private intelligence company, and turning over the data he confiscated to WikiLeaks. Hammond learned from the data Statfor was spying on activists and selling their information to governments. Hammond pled guilty in 2013 to one count of violating the Computer Fraud and Abuse Act (CFAA), the provisions of which drove internet revolutionary Aaron Swartz to take his own life that same year. The judge who tried Hammond’s case, Loretta Preska, did not recuse herself, despite the fact that her husband was one of the victims of the leak.

While this is Hammond’s third birthday in prison, his supporters are still determined to see him free, and honored.
“It’s completely amazing. While everyone is fighting and raging, we’re sending amazing children’s books all over the world,” observed Crabtree in the Cryptosphere interview. “The collective never ceases to amaze me. We can do such amazing things when we all work together.”