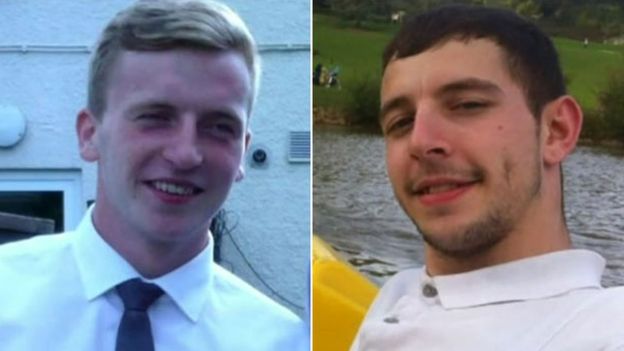 Kyle Careford, 20, and his friend Michael Owen, 21, were three times the speed limit – at 90mph (150kmph) – when their red Renault Clio smashed into the grounds of St Michael and All Saints church in Crowborough, East Sussex, in the early hours of April 12 and overturned. Both friends died instantly. Now their families have supported the release of the harrowing video that reveals the final moments of drug-fuelled friends, shown at the inquest into their deaths in Hastings on October 6, to warn others about reckless driving.

The footage shows the two young men laughing and singing, as Owen appears to give his friend a driving lesson. The car careered off the road just after Owen asked Careford to slow down. According to the police, while the duo had taken a cocktail of prescribed and illegal drugs, Careford did not have a license and wasn’t insured to drive the car owned by Owen.

The inquest, where the harrowing footage was revealed after it was found on Owen’s phone at the crash site, heard how the two friends had both taken drugs that “would have resulted in severe toxicity and have had a severely detrimental effect on Kyle’s ability to control the car”.

Owen’s mother Kat said watching the video was upsetting, but she is hoping it can be used in a positive way, by showing young people what could happen to them.

“We bring our children up teaching them right from wrong. We guide them and give them our advice and hope they listen, but once they are adults we hope they make the right choices. I really don’t know why the boys chose to do what they did, but I blame them both for the decisions they made on this night.

“If all this stops one person from making the same mistake, then some good has come from showing this video. I’m hoping it will have an impact on young people and make them see that a bit of fun can have such devastating consequences.

“I would like all the young people out there to take notice and realize that you are not invincible and take seriously how precious your lives are to yourselves and others. I want young drivers to consider how much devastation it causes to the families and loved ones that are left behind.”

Owen’s ex-girlfriend Lauren Humble, the mother of his five-year-old daughter Lily-Rose, called the video “heartbreaking to watch”. “I know plenty of people who drive fast and I hope that this video will show people that driving like this can have devastating consequences and how short life can really be.”

Careford’s brother Zac Hemming believed the footage or anything of its kind should never be recorded, let alone watched.

“However, despite the pain of it being broadcast by the media, we as a family just hope and pray that this will connect with at least one person out there, young or old, so that no-one ever has to experience the unthinkable pain of losing someone so close and dearly loved.”

“As Kat and Zac have so poignantly expressed, if the release of this incredibly impactive footage results in lives saved, then it will be a valuable legacy of Michael and Kyle’s sad deaths.”

This Article (Harrowing Video Shows Last Moments Of Two Friends Before Fatal Car Crash) is free and open source. You have permission to republish this article under a Creative Commons license with attribution to the author and AnonHQ.com.