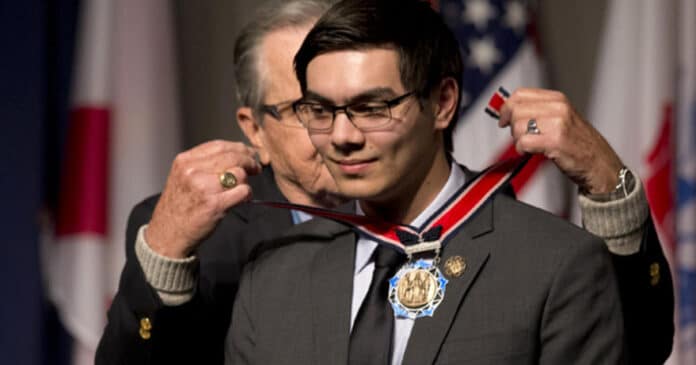 In the short clip, which was obtained by PEOPLE, Meis, who was then 22, can be seen pepper spraying gunman Aaron Ybarra as he attempted to reload his weapon, then tackling him to the ground. Meis disarmed Ybarra, confiscated the weapon and the returned to detain him with the help of another man. Before Meis took action, Ybarra killed one student and injured two others at the school’s Otto Miller Hall.

The surveillance video was released after lengthy court proceedings, the Seattle Times reports.

Ybarra was charged with one count of premeditated first-degree murder for the death of Paul Lee, 19, and two counts of attempted first-degree murder against Thomas Fowler Jr., and Sarah Williams, who were both injured in the shooting. In addition, he was charged with one count of second-degree assault. He is currently scheduled to be tried in September, and his attorney said he will pursue an insanity defense, the Times reports.

After his heroic actions, ESPN Seattle producer Jessamyn McIntyre created a GoFundMe site to help pay for their honeymoon and any other newlywed expenses that raised more than $50,000.