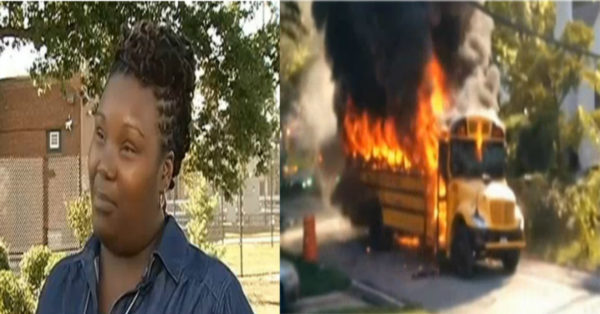 An American woman from Maryland has been hailed as a heroine by local media after reportedly saving 20 elementary school children from a blazing fire that engulfed the bus she was driving.

The brave woman, Reneita Smith is said to be driving the children to school in College Park, in Prince George’s County, a northeastern suburb of Washington DC, when the bus caught fire. The children were students at Robert Goddard Elementary and Glenarden Woods Elementary schools. Up to 20 children were in the bus when the incident happened. With nobody to help, Reneita reportedly moved straight into action. With the children’s safety as her primary concern, Reneita made sure all the children got out of the bus first. Her bus evacuation was successful. She reportedly returned to the burning vehicle, getting into it to check that it was totally empty. By doing so, she managed to save all 20 children. Nobody was hurt during Reneita’s process and all the children safely returned home to their parents.

Reneita’s heroic act was first shared on social media. Facebook user Fazlul Kabir posted pictures of the incident, praising Reneita for what she did. Kabir wrote: “A big THANK YOU to our school bus driver Reneita Smith who just saved 20 elementary school kids from a bus fire that completely destroyed the bus. Reneita [not only] took each one of the 20 kids from the bus one by one, but also went into the empty bus again to check if everyone was out, while it was still burning.” Indeed, Kabir never exaggerated in his post. Dashcam footage from another car confirmed what Kabir reported on social media. The footage showed the entire vehicle going up in huge flames with clouds of smoke billowing upwards. Commenting on Kabir’s post, many people congratulated Reneita for her heroic act that saved the lives of the children.

The Prince George’s County Fire Department later issued a statement to local media that it is investigating the cause of the fire. The department also praised Reneita for her bravery.

This article (Heroic: American Woman Saves 20 Kids From Burning to Death in School Bus [Video]) is a free and open source. You have permission to republish this article under a Creative Commons license with attribution to the author and AnonHQ.com.