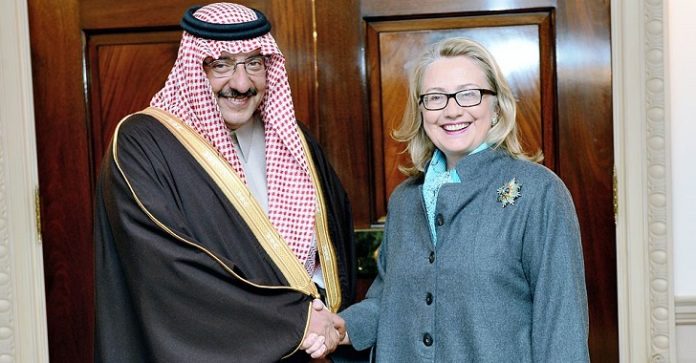 Perhaps Hillary Clinton needs a reminder that people have a difficult time placing trust in known hypocrites. Or perhaps unabashed hypocrisy simply doesn’t, for unknown reasons, strike her as an ethical deficiency.

“I have made it clear based on Senator Sanders’ own record that he has voted with the NRA, with the gun lobby numerous times,” Clinton said during one Democratic debate in January, proceeding to proffer ostensible examples from his congressional voting record. “Let’s not forget what this is about — 90 people a day die from gun violence in our country. That’s 33,000 people a year.”

Clinton’s attempts to equate Sanders’ votes with moral turpitude are devoid of reason on a number of levels, most glaringly because her largest donors — and some of the largest contributors to the Clinton Foundation — are connected directly or indirectly with the defense industry and the gun lobby.

Indeed, Hillary Clinton tops the list of presidential hopefuls receiving defense lobbyist contributions — outpacing even the top Republican candidates. On March 21, according to The Intercept, a fundraising rally for Clinton’s campaign will be hosted in part by Jeff Forbes of the lobbying firm Forbes-Tate, who — until 2016, apparently — had lobbied for the National Rifle Association. Yes, the gun rights advocacy group. Guns. The very industry Hillary loves to vilify other candidates over their lack of staunch opposition toward.

No, this is not in any way intended to demonize gun rights — or, for that matter, characterize guns and gun ownership in any manner. This is about Clinton’s complete lack of consistency, penchant for outright hypocrisy, and — more to the point — blatant support for weapons manufacturers as long as their wares are employed by the military. Certainly not as constitutionally-legal protection for citizens of the country she seeks to rule.

This also pertains to Clinton’s willingness to say just about anything in order to further her apparent lust for wealth and power.

Consider an analysis by the International Business Times last May, of Clinton’s tenure at the State Department:

“Under Clinton’s leadership, the State Department approved $165 billion worth of commercial arms sales to 20 nations whose governments have given money to the Clinton Foundation … That figure — derived from three full fiscal years of Clinton’s term as Secretary of State (from October 2010 to September 2012) — represented nearly double the value of American arms sales made to those countries and approved by the State Department during the period of George W. Bush’s second term.

“The Clinton-led State Department also authorized $151 billion of separate Pentagon-brokered deals for 16 of the countries that donated to the Clinton Foundation, resulting in a 143 percent increase … [which] compares to an 80 percent increase in such sales to all countries over the same time period.”

U.S. ally and unabashed human rights abuser, Saudi Arabia, also doled out $10 million to the nebulous Clinton Foundation prior to Hillary’s appointment as Secretary of State.

Hillary Clinton desperately wants you to believe her narrative — though, admittedly, keeping up with its chameleon propensity for molding to her funders’ industries or interests can be onerous.

Clinton’s lambasting of Sanders for a milquetoast gun control stance casts aside the entire industry of violence from which her direct funders amass obscene wealth. She hypocritically champions restrictive policies on private citizen ownership of weapons, but cozies up to recent associates of the NRA. And she claims the need to curtail violence and needless deaths, but acts as a de facto peddler of weapons of war.

This article (Hillary Hypocrisy: No Gun Rights for Americans, Billions in Arms for Dictators Overseas) is free and open source. You have permission to republish this article under a Creative Commons license with attribution to Claire Bernish and theAntiMedia.org. Anti-Media Radio airs weeknights at 11pm Eastern/8pm Pacific. If you spot a typo, email [email protected].