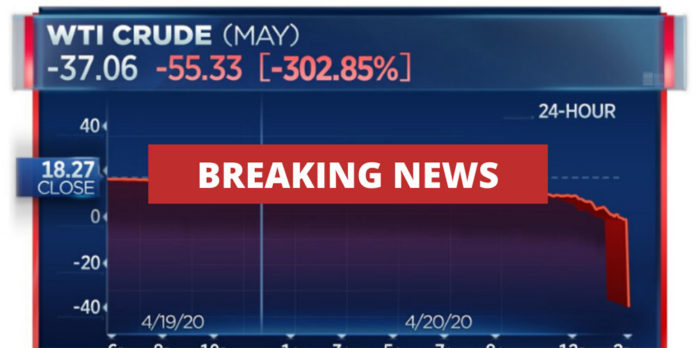 In a historic first, U.S. oil prices plummeted Monday into the negative, marking just the latest grim moment in the massive disruption of global markets caused by the spread of the novel coronavirus.

The collapse in crude oil prices and frenzied last-minute selling comes as demand has completely evaporated due to a freeze in hard-hit economies across the world, creating a massive glut in global supplies and casting doubt on whether fuel consumption will recover to pre-crisis levels any time soon.

The May contract for West Texas intermediate (WTI) crude oil plunged by a massive 321 percent to -$40.32 a barrel, marking the lowest price ever recorded since the New York Mercantile Exchange (NYMEX) began oil futures trading in 1983. The day ended with the price settling at minus $37.63 per barrel.

In the meantime, Brent Crude oil has also slumped by 9 percent to $25.57 per barrel—nowhere near as precipitous a fall as that experienced by the May U.S. WTI contract set to expire Tuesday.

“The storage is too full for speculators to buy this contract, and the refiners are running at low levels because we haven’t lifted stay-at-home orders in most states.

“There’s not a lot of hope that things are going to change in 24 hours.”

And with U.S. oil prices having settled in negative territory, sellers are in the ruinous position for the first time ever of having to pay buyers to take oil futures. Whether this translates to lower oil prices at the gas pump for consumers remains an open question.

“Pricey shut-ins or even bankruptcies could now be cheaper for some operators, instead of paying tens of dollars to get rid of what they produce.”

The drastic fall in prices comes after prices already reached an 18-year low last week as markets realized that the landmark deal agreed to by OPEC, Russia, Mexico and other producers to secure a 9.7 million barrel per day cut in production was far from enough to offset the crushing fall in demand.

However, with global oil capacity reaching its ceiling, the U.S. Department of Energy is mulling the idea of paying domestic producers to leave the oil in the ground in order to prevent the further depression of crude prices.

“Even if we get the COVID-19 shelter-in-place protocols lifted by April 30, and we start to see some pop in demand, you are going to have so much oil sitting in tanks that, regardless of production cuts, you are still looking at a massive glut of oil going into the third quarter,”

The collapse in oil markets comes as the world experiences an epic, spiraling economic downtown due to the COVID-19 pandemic, which some economists fear could be the deepest crisis experienced by the global economy since the Great Depression of the 1930s.

Last Tuesday, the International Monetary Fund (IMF) released an analysis by the Washington-based organization’s Chief Economist  Gita Gopinath that christened the current crisis as a “Great Lockdown.” Noting that “the magnitude and speed of collapse in activity that has followed [the panemic] is unlike anything experienced in our lifetimes,” Gopinath added:

“Many countries now face multiple crises—a health crisis, a financial crisis, and a collapse in commodity prices, which interact in complex ways. Policymakers are providing unprecedented support to households, firms, and financial markets, and, while this is crucial for a strong recovery, there is considerable uncertainty about what the economic landscape will look like when we emerge from this lockdown.”