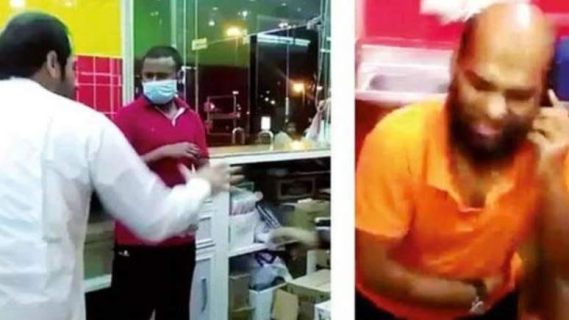 A video – now viral on social media – shows a citizen of Saudi Arabia shooting a waiter dead at a restaurant, for not serving him fast enough.

The gory incident reportedly happened in the suburb of Aflaj, in the capital Riyadh.  Local media identified the restaurant worker as a 40-year-old Indian expatriate, named Nasser. The incident happened on July 16. Nasser arrived in Saudi Arabia from the southern Indian state of Kerala as an expatriate worker. Nasser reportedly died on the way to the hospital.

The Riyadh police confirmed to local newspaper, Saudi Gazette that a colleague of the victim called the police to report the shooting. When the police arrived at the scene of the crime, the suspect had fled. The police told the paper that witnesses accounts suggest Nasser was shot by the suspect because of delays with an order of food.

The paper quoted police source as saying: “The police showed up to the scene to find the expatriate had been shot and blood was pooling from his body. The victim was taken to the hospital but he had already passed away. The police looked at the surveillance camera footage and was able to identify the customer. Some witnesses say the worker had delayed the customer’s order, which aggravated him.”

According to the police, the suspect was arrested after investigators identified him from surveillance camera footage. The police failed to name the suspect, but said he is in his late 30s. The police added that a trial will quickly take place. The video of the incident, posted on social media, showed a shot being fired and the victim running and shouting for help.

However, another account of the incident narrated by Indian media, differed slightly. According to the Daily Mathrubhumi newspaper, the victim’s relatives said the reason for the ugly incident was not about a delay in food order, but the suspect after eating in the restaurant, refused to settle his bill. The paper reported that the suspect, together with his other three friends – all Saudi nationals – refused to pay for the food they had eaten. Nassar protested, picking a quarrel with the four men. The men left the restaurant, but the suspect returned with a gun and fired at Nasser, leading to his death.

The relatives added that Nasser has since been buried in Saudi Arabia. They added that he left behind a wife and three children.

Many people in Saudi Arabia have expressed disgust about the incident. Many have called for the suspect to receive the death penalty.

In 2014, the Saudi Gazette reported that a mentally disturbed man stabbed a grocery employee 54 times, killing him in front of a large crowd. The crowd reportedly never made any attempt to save the victim from the mentally unstable man.

This article (Horror: Indian Restaurant Worker Shot Dead in Saudi Arabia for Delaying Food Order [Video]) is a free and open source. You have permission to republish this article under a Creative Commons license with attribution to the author and AnonHQ.com.