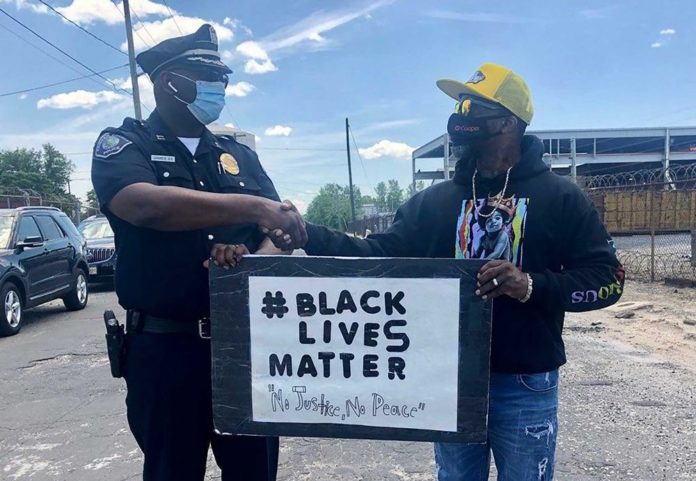 Camden adopted an 18-page use-of-force policy. The rules emphasize that de-escalation has to come first….An officer who sees a colleague violating the edict must intervene. Reports of excessive force complaints in Camden are down by 95% since 2014.

Across the U.S., protesters have taken to the streets to express rage after the killing of George Floyd by a Minneapolis police officer, Derek Chauvin. The demonstrations themselves have led to more police shows of force. In Brooklyn, two cops rammed their New York City Police Department SUVs into a crowd of protesters. In Philadelphia, officers sprayed tear gas at demonstrators who were penned in between a highway and a fence.

But across the Delaware River from Philadelphia in Camden, N.J. (population 74,000), officers left the riot gear at home and brought an ice cream truck to a march on May 30. The police department’s chief, Joseph Wysocki, who is white, brandished a “Standing in Solidarity” poster alongside residents holding “Black Lives Matter” signs.

That Camden was able to demonstrate peacefully without escalation looked like a sign of progress in a city that’s one of the country’s poorest and was once considered its most dangerous. “What we’re experiencing today in Camden is the result of many years of deposits in the relationship bank account,” says Scott Thomson, Camden’s chief of police until 2019. He led the city’s high-profile pivot to community policing from 2013 until last year and oversaw what turned out to be a steep decline in crime. Homicides in Camden reached 67 in 2012; the figure for 2019 was 25. Over the past seven years, the department has undertaken some of the most far-reaching police reforms in the country, and its approach has been praised by former President Barack Obama.

The transformation began after the 2012 homicide spike. The department wanted to put more officers on patrol but couldn’t afford to hire more, partly because of generous union contracts. So in 2013, the mayor and city council dissolved the local PD and signed an agreement for the county to provide shared services. The new county force is double the size of the old one, and officers almost exclusively patrol the city. (They were initially nonunion but have since unionized.) Increasing the head count was a trust-building tactic, says Thomson, who served as chief throughout the transition: Daily, noncrisis interactions between residents and cops went up. Police also got de-escalation training and body cameras, and more cameras and devices to detect gunfire were installed around the city.

While many departments define “reasonable” force in the line of duty vaguely, Camden’s definition is much clearer. The department adopted an 18-page use-of-force policy in 2019, developed with New York University’s Policing Project. The rules emphasize that de-escalation has to come first. Deadly force—such as a chokehold or firing a gun—can only be used in certain situations, once every other tactic has been exhausted. “It requires that force is not only reasonable and necessary, but that it’s proportionate,” says Farhang Heydari, executive director of the Policing Project. Most important, “they’re requirements. They’re not suggestions.”

An officer who sees a colleague violating the edict must intervene; the department can fire any officer it finds acted out of line. By the department’s account, reports of excessive force complaints in Camden have dropped 95% since 2014.

Like most matters of policing, however, Camden’s success story isn’t that simple. Members of the police force are now more likely to live in the suburbs than in the city of Camden, according to the local NAACP chapter. “Ninety percent of Camden’s population is minority—we have a lot of young individuals who don’t look like us that are getting these jobs,” says Kevin Barfield, the chapter president.

The higher number of officers on the streets was uncomfortable at first, says Nyeema Watson, Rutgers University at Camden’s associate chancellor for civic engagement, who helped connect the new department to local youth in its early days. “You felt that this eye was on you. It took me some time to adjust to having [police] cars stationed on major thoroughfares,” she says. “That still raises the hair on my neck sometimes, but I know their approach is an attempt to say ‘We’re here, we’re visible.’ ”

In a 2015 report, the American Civil Liberties Union praised Camden for its reforms but noted a “significant increase in low-level arrests and summonses.” The department says it’s mindful of overpursuing petty offenses. “We know when we police a city that has 30% of the residents under the poverty line, a $400 speeding ticket or ticket in general would be absolutely devastating financially,” says Dan Keashen, a spokesman for the Camden County Police Department.

Community organizer Ayinde Merrill and other activists are pushing to create a civilian review board for cases in which force is used. Merrill says the May 30 march felt co-opted by police and city leaders: “We didn’t feel as though the police were truly standing with us. If you’re truly standing with us, come and march with us in plain clothes.”

As some activists call for cities to defund the police, Camden’s reforms are more incremental in nature. “I think the challenge is that you have 18,000 police departments” in the U.S., says Thomson. “It’s an industry that generally is averse to any type of change. The only time change comes is when it’s compelled.”

BOTTOM LINE – After rebuilding its police force, Camden drove down homicides and reined in use of excessive force. Local activists say police-community relations could still be better.
Get Your Anonymous T-Shirt / Sweatshirt / Hoodie / Tanktop, Smartphone or Tablet Cover or Mug In Our Spreadshirt Shop! Click Here
Loading...