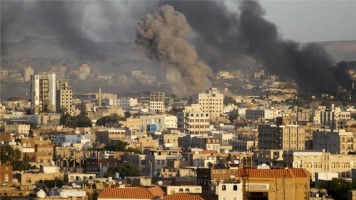 Yemen – For the last 13 months a ‘proxy’ civil War has been waged between Sunni forces backed by Saudi Arabia and Shia forces backed by Iran – both seeking constitutional control over the country. The fighting began in March 2015 after Saudi led airstrikes began raining down on Shia “rebels” whom were seeking political succession from the country. Since then it is estimated that nearly 2.4 million people have been displaced by violence, nearly 80% of the entire population is in need of humanitarian aid and 8,100 people have been killed – 3,200 of which were innocent civilians. The United Nations which has been heavily involved in negotiating a cease fire agreement between the two sides claims they have not had direct access to the region and in a recent statement went on to say “despite public promises to investigate such incidents, we have yet to see progress in any such investigations.”  One group however, known as Human Rights Watch has had access to the region and last January released a report claiming “119 coalition sorties relating to violations of the laws of War.” The investigative panel has also released video evidence proving that the same bombs used to target civilians are of United States origin.

“The panel documented that the coalition had conducted airstrikes targeting civilians and civilian objects, in violation of international humanitarian law, including camps for internally displaced persons and refugees; civilian gatherings, including weddings; civilian vehicles, including buses; civilian residential areas; medical facilities; schools; mosques; markets, factories and food storage warehouses; and other essential civilian infrastructure, such as the airport in Sana’a, the port in Hudaydah and domestic transit routes.”

Though the bombs are of US origin the US itself has not conducted any strikes directly, instead these have been conducted by allied Saudi Arabia. Last November the White House approved 1.29 billion dollars in aid/weapons to assist Saudi forces in Yemen, but officials are quick to point out that this is where it ends. Leaders at U.S. Central Command have stated that “selection and final vetting of targets in the campaign are made by the Saudi-led coalition, not the United States.” – distancing themselves from any War crimes which may have been committed. Less than a month ago the Assistant Secretary of Defense for International Security Affairs went in front of Congress to assure them that despite weapons sales to the region that “U.S. forces are not taking direct military action in Yemen.”

Foreign Policy Magazine is on record of stating that in addition to providing 1.3 million dollars in aid/weaponry to Saudi forces, the United States has used the Air Force to assist in “nearly 750 U.S. led aerial refueling missions” of Saudi bombers. Furthermore, the publishers also go on to point out that despite ‘not taking direct military action in Yemen’ the United States has contributed to the War effort “with bombs, intelligence, refueling, search-and-rescue capabilities..and drones.”

“We have been attempting to bolster the relationship with Saudi Arabia after some of the fractious disagreement about the Iran nuclear deal, and concerns in Saudi Arabia and in the Gulf about Iranian continued efforts to encroach on Sunni Arab areas….

….the United States simply decided it was best to pollster and repair that relationship with Riyadh and support them in the way that we have been doing…

…there is intelligence that’s being provided from a range of U.S. intelligence capabilities, to include drones that are flying over Yemen on a regular basis. The air refueling that was commented on in the intro piece…

When asked if the United States bares any blame for the civilian casualties at the hands of US manufactured bombs sold to and used by Saudi forces, Mr. Harvey replied:

“We have been supporting an ally, and, in that sense, you know, there is some responsibility. The United States administration, the Obama administration, Secretary Kerry and others, have distanced themselves very clearly from that conflict and are recognizing that it’s really about supporting Saudi Arabia and repairing the relationship.

So, they understand that they’re in a hard place because of the blowback and the concerns that the United States is being tainted by the support of the Saudi Arabians in this conflict.“

This article (The Impact of US Involvement In The Yemen Civil War) is free and open source. You have permission to republish this article using a creative commons license with attribution to the author and AnonHQ. Join the conversations at www.anonboards.com