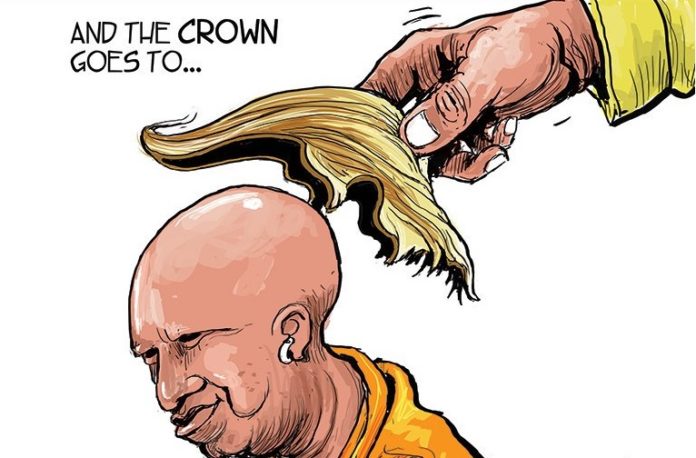 A far-right anti-Muslim firebrand Hindu priest, Yogi Adityanath, was recently appointed the chief minister of Uttar Pradesh, India’s most populous (with a population of over 200 million, 40 million of which are Muslim) and politically significant state (it sends 80 elected representatives to the 545-member Indian Parliament).

According to the latest census (2011 figures), Hindus make up 79.8% and Muslims make up 14.2% percent of the country’s 1.2 billion citizens. The appointment of Adityanath is a clear signal that India’s Hindu nationalist Prime Minister, Narendra Modi, is trying to polarize communities on religious and communal lines for electoral gains with the selfish intention to win the 2019 general elections.

The move is also seen as a step toward a right-wing populism that puts radical demands of Hindu hardliners ahead of economic development.

This is a nation that once was said to succeed in spite of the gods. Now it is going backwards because of them. – The Guardian

A turning point for a government that has, until now, steered clear of openly embracing far-right Hindu causes. – The New York Times

With the appointment, Modi is unveiling a vision of benign majoritarianism. That means it’s a Hindu country, that’s the fact, and we’ll be nice to you if you behave yourself. – Business Standard

The rise of the Hindu priest-turned-politician in Uttar Pradesh, a state prone to sectarian strife, surprised many after Modi made his development agenda the focus of his campaign in the region, which is traditionally fractured along caste and religious lines. – Al Jazeera

The rise of Hindu nationalists has already triggered concerns among India’s religious minorities, and the choice of Adityanath is likely to intensify them. – BBC

Adityanath, a staunch follower of Hindutva — an ideology that advocates Hindu hegemony over a secular India — is infamous for being a “hate spewing Yogi” for multiple reasons. He has 18 criminal cases registered against him including attempted murder, criminal intimidation and rioting.

He has vowed to cleanse India of other religions. He has accused Mother Teresa of being part of a conspiracy to Christianize India. He has even proclaimed, “If given a chance, we will install statues of Goddess Gauri, Ganesh and Nandi (Hindu deities) in every mosque.”

Exhorting his followers to kill Muslims comes naturally to Adityanath. He once declared, “If one Hindu girl marries a Muslim man, then we will take 100 Muslim girls in return. If Muslims kill one Hindu, we will kill 100 Muslims.” The Sydney Morning Herald reports:

“In Adityanath’s worldview — if such a grand word can be used about his grubby beliefs — Muslims can only live in India on sufferance. They need to “know their place” and subordinate themselves to the Hindu majority, or else … and the “else” is the threat of violence.

“On several occasions he has said he will “not stop” until India is turned into a “Hindu nation”… Educated Muslims are seriously worried. As one of them said recently: “If they win in 2019 and the opposition continues to be as pathetic as it is, what’s to stop them altering the constitution to delete the word ‘secular’?”

Do Muslims in India in general, and Uttar Pradesh in particular, have reasons to worry?

Although Keshav Prasad Maurya, Adityanath’s deputy, insists the Uttar Pradesh government does not distinguish residents of the state as Hindu and Muslim, the assurance runs directly against Adityanath’s public statements over the past decade.

“Adityanath is known for his anti-Muslim remarks and staunch support for Hinduism and by appointing him as the CM, the party has made development in the state take a backseat. A majority of Muslims are feeling insecure today and will remain worried as he continues to rule over the state for five years.”

“There is a sense of fear in a large section of Muslims after the announcement of Yogi Adityanath as the UP CM face. It is said that when people don’t have responsibilities, their actions and words are not well thought of, but with responsibilities change comes too. All we can hope is that the change comes in this case as well.”

Adityanath’s arrival, writes Foreign Policy, has refocused anxieties that Modi will push a far more aggressively nationalistic Hindutva agenda that insists India is a Hindu nation that should relegate Muslims and Christians to a status as outsiders. Devesh Kapur, a professor of political science at the University of Pennsylvania, notes:

“It is a deeply worrying decision and one that sends all of the wrong signals about Modi and the kind of government he wants to lead. Uttar Pradesh has more Muslims than Saudi Arabia. What sort of message does it send to appoint a figure who is so blatantly bigoted and prejudiced?”

This article (India: Right-Wing Populism Rears Its Ugly Head, Anti-Muslim Hindu Monk Takes Oath as CM) is a free and open source. You have permission to republish this article under a Creative Commons license with attribution to the author and AnonHQ.com.