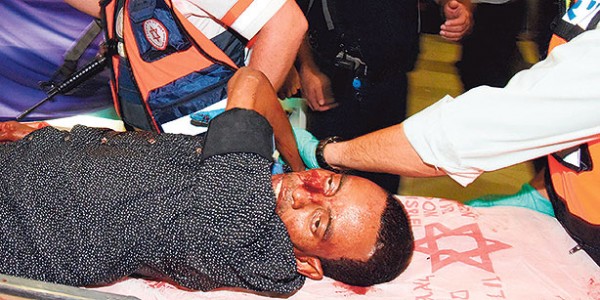 An African migrant from Eritrea, has been barbarically shot and lynched to death at a bus station by an Israeli angry mod. The attack occurred after an unidentified attacker opened fire within the station. The gunman, who is believed to be a Palestinian, killed one person and injured more than ten others.

The incident happened in the southern city of Beersheba. Since the incident occurred, many activists have condemned the killing, calling on the Israeli government to bring the perpetrators to justice immediately.

Although the real attacker was shot dead, it is unclear why the innocent migrant worker was targeted and killed in that manner.

According to reports gathered on the ground, the Eritrean man had gone to the city to renew his visa and had nothing to do with the attack. Ultimately, this means the Israelis have murdered this man in cold blood. Video footage posted on both mainstream and social media, showed the man lying in a pool of his own blood. In the video, armed paramilitary police surround the man while individuals in the mob attempt to kick his lifeless body.

The Jerusalem Post identified the man as Mulu Habtom Zerhom. Witnesses to the incident said Zerhom was first shot by a security guard who thought he was the one who carried out the attack. After he was shot, he was then severely beaten by people at the bus station. In the footage posted, mob members can be seen throwing a set of chairs at the dying man.

Hospital sources have confirmed that Zerhom died from the gunshot wound and the head injuries he sustained during the beating.

The Israeli Prime Minister, Benjamin Netanyahu—who has encouraged the country’s civilians to carry guns in the face of the violence—was forced to eat his own words after critics  spoke out against the death of the Eritrean. He was quoted as saying “We’ve a country of law. No one will take the law into his own hands.”

Many peace activists and observers have blamed the lynching on the Israeli government.

“What happened was wrong. It was because of the anarchy; people are afraid.”

“The finger must not only be pointed at those who lost their humanity yesterday in the bus station. The lynchers did not act in a vacuum. When the Defense Minister calls on civilians to carry weapons, when the Education Minister is photographed like a cowboy with a gun on his belt…it is hard to be surprised when reality turns into the Wild West.”

“I understand the public’s great anger and pain, but it is unthinkable that one would harm a helpless person lying on the ground. Such behavior is immoral and inhumane and not Jewish,” said a number of activists and politicians who oppose the Israeli government’s approach to the Palestinians.

The BBC reports that Israeli police spokeswoman, Luba Samri has said officers are working to arrest those who “aggressively beat and kicked Zerhom while he lay on the floor and posed no threat.”

For almost three weeks now, violence has flared up between Israelis and Palestinians. The Reuters News Agency reports that 41 Palestinians, including assailants and demonstrators at anti-Israeli protests; eight Israelis and now one Eritrean have been killed since the violence began. Israel has not only poured hundreds of troops into its cities, it has also set up roadblocks in the Palestinian neighborhoods of East Jerusalem.

According to independent accounts, the recent violence has partly been caused by the Palestinians’ anger over what they see as increased Jewish encroachment on Jerusalem’s al-Aqsa mosque complex. The Palestinians believe the Israelis are on the verge of taking their holy site away from them.

The US Secretary of State, John Kerry is expected to meet Israeli Prime Minister, Benjamin Netanyahu and the Palestinian President, Mahmoud Abbas separately this week to try to find ways to calm the current situation.

This Article (Innocent Eritrean Migrant Shot And Lynched To Death In Israel After Bus Station Attack [Video]) is free and open source. You have permission to republish this article under a Creative Commons license with attribution to the author and AnonHQ.com