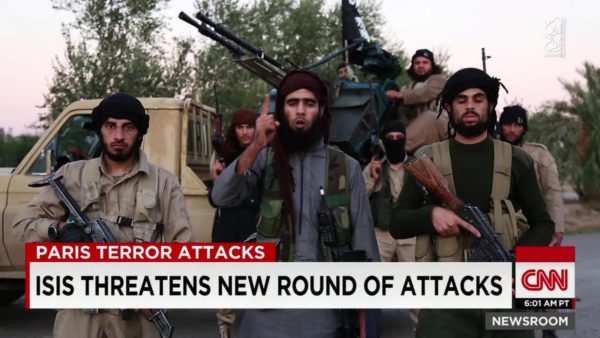 An international watchdog body named SumOfUS, is appealing to concerned citizens around the world to add their voice, in order to stop the French city of Paris from doing business with a company that has been secretly sponsoring the so-called Islamic State of Iraq and Syria (ISIS).

The city of Paris, where ISIS carried a devastating attack in November 2015, killing 130 people and injuring 368 announced recently that it has awarded a project to the country’s industrial giant, Lafarge to provide sand for the construction of artificial beaches in the city. The project was awarded to Lafarge by the Office of the Mayor of Paris, under the leadership of Anne Hidalgo.

However, secret documents obtained by several journalists  have revealed that Lafarge has been paying taxes to ISIS, in order to operate its cement plant in Syria. The company has also bought oil from ISIS for years now, ensuring that the terror group is able to carry out its operation.

During Clinton’s tenure with Lafarge, the company was implicated in facilitating a CIA-backed covert arms export network to the then Iraqi dictator, Saddam Hussein. First to bring the attention of the activities of Lafarge in Syria is Zaman al-Wasl, an independent news outlet run by some members of the Syrian opposition.

In February 2016, Zaman al-Wasl published hacked internal documents and emails from Lafarge Cement Syria, in which the CEO of the Syria branch of the company, Frederic Jolibois personally instructed the company to make payment for oil bought from ISIS.

Apart from buying ISIS’ oil, the news outlet also revealed that Lafarge supplied cement for ISIS to sell. Proceeds from the sale are shared between Lafarge and ISIS.

In one of the emails Zaman al-Wasl published, Lafarge general manager Bruno Pescheux received a warning from his Syrian senior plant manager about repercussions of the company’s illegal purchasing of oil and other activities with ISIS, and other armed groups in the country.

When this revelation was made, the French daily Le Monde tracked the story, deploying undercover journalists to Syria to investigate the issue. In June 2016, Le Monde confirmed from its investigations that Lafarge has indeed been paying taxes to ISIS middlemen, as well as other armed groups in Syria, to protect its cement business operations in the country.

Le Monde found that Lafarge had merged with Swiss cement maker Holcim in 2015. But before the merger, Lafarge had made arrangements with ISIS to continue producing cement in the area until September 2014. According to Le Monde, documents its undercover journalists obtained in Syria show that Lafarge’s Paris headquarters were fully aware of the business deal with ISIS. It is said the company even sent a representative into ISIS territory to get permission from the terror group, allowing employees past its checkpoints. The pass granted by ISIS is said to have been discovered with the company’s finance chief in the Aleppo region in Syria. The pass was also to allow the free circulation of Lafarge goods into the area. Since these revelations were made, Lafarge has declined to respond to it. Surprisingly, the city of Paris has gone ahead to award the sand project to Lafarge, to construct the artificial beaches.

This angered SumOfUS to take the initiative of collecting signatures to stop the city from doing business with a company that does business with terrorists.

Campaign manager of SumOfUS, Eoin Dubsky said: “Terrorists should never be business partners. It is beyond reprehensible for Lafarge to be cutting deals with Isis just for profits’ sake. By enriching the terrorist group’s coffers with payments to continue its operations in Syria, Lafarge is inadvertently supporting Isis worldwide campaign of terror that has left scores killed, displaced and under siege in one of the worst humanitarian nightmares of our time.” You can click here to add your signature to the petition. The page is in French. Take your time to click on the automatic translation in order to read before you sign.

For Hillary Clinton’s links with the company, we are putting together another piece to expose her. Just keep your eyes on our space. Expect Us!

This article (International Watchdog Group Appeals for Signatures to Stop Partnership between Paris and Secret ISIS Sponsor Tied to Hillary Clinton) is a free and open source. You have permission to republish this article under a Creative Commons license with attribution to the author and AnonHQ.com.