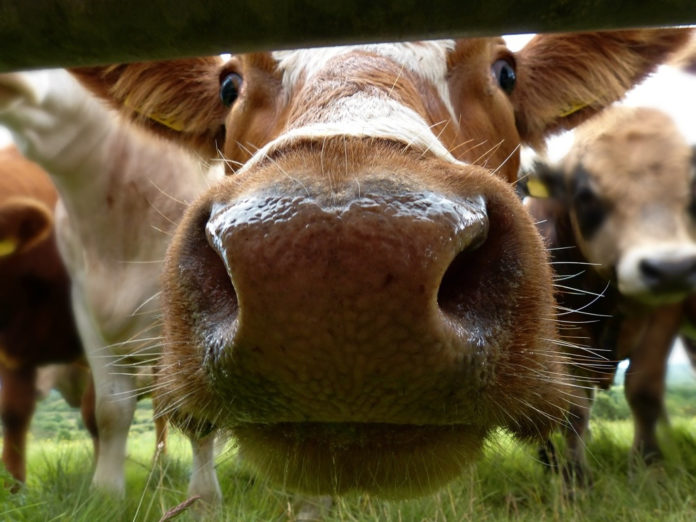 Over 56 billion farmed animals, not including fish and other sea creatures, are killed every year. This equates to around 75 pounds of meat per person, per year, according to research by the Organization for Economic Cooperation and Development.

Due to a combination of cultural norms, religious beliefs and the high cost of meat, some countries eat a lot more meat than others.

In America, meat consumption rapidly increased after the 1980s, reaching its peak in the 1990s. Today. Americans are eating on average around 20 pounds less meat per person, per year, than they were about ten years ago. Despite this decline, the United States ranks second in the Organization for Economic Cooperation and Development’s global meat consumption table, consuming around 198.5 lb of meat every year.

The agriculture industry view these animals as a resource that must be farmed using techniques that will maximize profit, whilst still fulfilling the huge demand for meat. Unfortunately, many of these techniques involve inhumane practices that harm the animals, consumers and the Earth itself. While there are some farms that fit with the consumers idealized vision of the agricultural industry – open fields, a spacious barn filled with troths of healthy produce – in reality, the animals are subjected to poor conditions, treatment and food. Over 99% of farm animals in the U.S. are raised in factory farms, an industrial operation that raises large numbers of animals for food to maximize profit and efficiency.

“While most Americans expect our laws to protect farm animals, the reality falls far short. Animals raised for food are among the least-protected class of animals in our nation,” states the ASPCA website.

To boost production, some cows are injected with the growth hormone rBGH.

Fistulation is a practice that involves removing a chunk of a cow’s abdomen to expose their stomachs. Practiced by animal experimenters, veterinarians and farmers, the procedure allows humans to easily access the microbes in the stomach of the cow so they can be studied or, in some cases, transferred to other animals.

It is claimed that the transfer can improve the cow’s health and does not physically hurt the animal, however, animal rights groups argue that the practice mostly appears to benefit the meat and dairy industries, as it optimizes “food and digestion for animals who will ultimately be exploited and slaughtered.”

The animal agriculture industry, especially factory farms, have used antibiotics to stave off sickness and make the animals grow quickly. Today, animals are often caged in overcrowded facilities that are not regularly cleaned. As a result, the animals are forced to stand, sleep and eat in an enclosure that is filled with food waste, excrement and even rotting corpses.

As these conditions make the animals prone to sickness and disease, they are regularly fed antibiotics. As bacteria is able to constantly evolve and adapt, farmers become dependent on antibiotics as a long-term solution to battle infection. Ultimately, this overuse of antibiotics in our food system “creates the potential for dangerous, drug-resistant strains of bacteria to develop and spread among people and animals,” explains the ASPCA.

According to a report, more than 70% of antibiotics that are medically important for humans are used in animals in the United States. The report, which is part of an ongoing review of antimicrobial resistance (AMR) commissioned by the British Prime Minister, aims to provide a set of recommendations on how to address AMR globally.

After concluding that high levels of antimicrobial use in food production can cause drug-resistant strains to be passed to both humans and the environment, the report advised that the number of antibiotics used in agriculture needs to be dramatically cut.

Animals that are farmed to meet the global demands for meat – cows, chicken pigs – often become stressed and agitated when confined for a long period of time. In many cases, this natural response can lead to aggressive behavior. In an effort to stop the animals from injuring the other animals in the enclosures, the animals undergo physical alterations.

Chickens, for example, will have their beaks clipped in order to prevent them from feather pecking. Within a flock of up to 90, hens are able to establish their position in the literal pecking order. However, in a factory farm, flocks often exceed 16,000 hens, which alters their natural behaviors. If left to develop, feather pecking can become habitual within a large flock, endangering the lives of the hens.

Lesser known examples of physical alterations include tooth-clipping, tail docking, castration, and ear-notching or another identification methods such as tagging or tattooing. Piglets often undergo at least one of these procedures during the first few days or weeks of life.

Piglets are born with outwardly projecting canine teeth, which they use when competing with littermates for teat access. The procedure can often cause discomfort and potential infection due to opening of the pulp cavity. While it may be argued that the procedure reduces mortality and injury rates, recent studies have suggested that there is little to no significant advantage to the clipping of teeth.

The barbaric practices and inhumane treatment is not limited to the meat industry. Animals that are bred for animal by-products, such as wool and leather, are also suffering. In 2014, PETA released video footage showing workers killing, beating, stomping on, kicking, mutilating, and throwing sheep around as they sheared them in Australia, the world’s top wool exporter, and also in the United States.

PETA’s video exposé highlights were released after the animal welfare group conducted eyewitness investigations into the wool industry. The investigations – the first of their kind – took place in 19 shearing sheds in Australia and 14 ranches in the States. Please be advised that the following footage may contain disturbing images.

In addition to the abusive treatment, the sheep were deprived of food and water before shearing. The workers explained that this made the sheep put up less resistance during the shearing process.  “Imagine if someone attacked you after … you’d been starved for 24 hours—you wouldn’t have much of a fight,” one shearer explained.

Upon undergoing the shearing process, sheep are often left with severe cuts and lesions. The workers are most commonly paid by volume, not by the hour, which encourages quick and violent shearing methods.

To treat these cuts, workers sewed up the gapping themselves. No pain relief was given to any of the animals. Investigators noted that they did not witness any veterinarian provide injured sheep with veterinary care during their stay.

Slaughter regulations differ in each country. Under the Humane Methods of Livestock Slaughter Act, the vast majority of animals in the U.S. are stunned before slaughter, ensuring that the animal is unconscious and unable to feel pain. However, law permits Jewish and Muslim communities to slaughter animals according to their religious beliefs – these products are labeled as Kosher and Halal, respectively.

Typically, the slaughter process includes two stages – stunning and sticking. Larger animals, such as cows and pigs, are most commonly shackled by a hind leg and hoisted above the ground before a slaughter person sticks the animal. Meanwhile, birds are hung upside down by their legs on metal shackles along a moving conveyor belt. The birds are then transported to a stunning water bath before meeting their end at a mechanical neck cutter, which cuts the major blood vessels in the neck.

As mentioned above, regulations regarding the treatment and slaughter of animals are different in each country. Depending on your location, a significant percentage of the meat sold in supermarkets are sourced from abroad, making it difficult for consumers to make informed decisions when purchasing meat that has been sourced from well-treated and humanly killed animals.

Earlier this month, PETA and Anonymous for Animal Rights (Israel) released details of an eyewitness investigation that aimed to expose the horrors of one of the cruelest industrial cattle slaughter methods. The method, known as shackle and hoist, is often used in kosher meat production plants in the South American nations of Uruguay, Paraguay and Argentina.

The shackle and hoist method involves restraining the cows with a sharp tool called a “devil’s fork.” The cows, which are still conscious, then have their throats slit before being hoisted onto a rail for processing. Workers then drive a spike called a “puntilla” into the cows’ spine. Although the spike paralyses the animal, the cow is still able to experience pain.

“The shackling and hoisting shown in this video is a violation of all industry and international welfare guidelines.” — Dr Temple Grandin, renowned animal-welfare expert.

The investigation comes after the chief rabbi of Israel promised to phase out “shackle and hoist” slaughter and declare the meat to be “non-kosher.” According to PETA, the chief rabbi had made this declaration following a series of PETA investigations into kosher slaughterhouses in Uruguay.

Although this method of slaughter is mostly prohibited in the United States, millions of tons of beef are imported from countries such as Uruguay and Argentina. As the method of slaughter is not labelled on the majority of meat products, it is likely many citizens around the world are consuming animals that have been treated and slaughtered inhumanely.

This article ((Investigation) What Are You Eating? Take a Close Look at these Meat Industry Secrets) is a free and open source. You have permission to republish this article under a Creative Commons license with attribution to the author and AnonHQ.com.