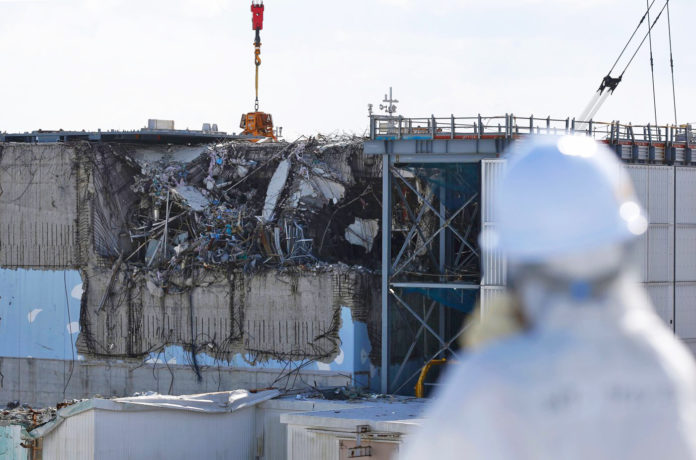 Radiation in Fukushima was so bad, they couldn’t afford to send people into some places. It turns out, the radiation was so high that even the chrome-domed replacements didn’t fare much better.

“It is extremely difficult to access the inside of the nuclear plant,” Naohiro Masuda, Tepco’s head of decommissioning said. “The biggest obstacle is the radiation.”

The solution? Robots. The problem? Robots.

As soon as Tepco’s robots, co-designed with Toshiba, get close to Reactor 3, their circuitry gets destroyed by the radiation. The robots are designed to “swim” in the radiated pools where the radioactive fuel rods are located, to search for and recover them.

The robots are unable to enter Reactor 3 because of the concentrated levels of radiation compared to the lesser toxic Reactor 4, where 1,535 fuel rod assemblies had previously been removed. Workers were also able to stand near enough to the pool to directly observe the process in Reactor 4.

This is the same company, mind you, which “accidentally” used radiation monitoring equipment which maxed out at 100mSv when the radiation was 18 times higher – nobody was concerned that the reading was stuck at 100 for really long periods of time, apparently.

Tepco claims that the radiation levels in many locations at the site have fallen dramatically. We were unable to verify if they were using the correct equipment at this time. However, more than 8,000 human workers continue to risk their lives clearing the site of debris at any one time throughout the day.

Water is pumped into the reactors to cool them, and the irradiated water is stored in leaky, illegally-constructed-by-desperate-poverty-stricken-people water tanks.

So far, Japanese fishermen have refused to allow Tepco to release the water it has “treated” into the sea… though Tepco site manager Akira Ono claims that he is “deeply worried” the storage tanks will leak radioactive water into the sea anyway.

Masuda, for his part, claims that leaks have been greatly reduced ever since the company built a wall along the shoreline. Walls are apparently an important solution for every problem in the world.

“I am not about to say that it is absolutely zero, but because of this wall the amount of release has dramatically dropped,” he said.

In February, Tepco completed construction of the world’s largest ice wall to prevent the water from leaking into the groundwater, and thus, into the sea. The wall will only be tested later in the year when water is pumped through the pipes and frozen.

Tepco is developing another robot that will be ready by 2017. However, it is unknown how long that one will last:

This article (Radiation so High at Fukushima, Tepco’s Robots can’t Survive ) is a free and open source. You have permission to republish this article under a Creative Commons license with attribution to the author(CoNN) and AnonHQ.com.