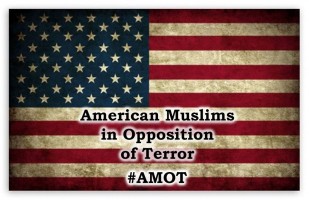 Last week, a group of individuals known as the American Muslims in Opposition of Terror (AMOT), came to the forums of www.anonboards.com to share their story. Upon reading, we here at AnonHQ News felt compelled to share this with as many people as we could. In a day and age where xenophobia and hate speeches have somehow become the accepted norm in American societies, the message of the American Muslims in Opposition of Terror is something everyone needs to hear. Here is AnonHQ’s exclusive interview with AMOT, please share their message and like/follow this group on Facebook to show your support for what these people are trying to accomplish.

Q: How did American Muslims in Opposition of Terror begin?

A: American Muslims in Opposition of Terror (AMOT), came about in response to the pressure in the media for moderate Muslims to stand up and denounce terrorism. There are those in society who doubt Muslims would stand up and denounce terrorism. In their opinion, the entire Muslim population approved of such acts. American Muslims and non-Muslim Americans both share the same goal, we exist to show society that we are united in solidarity against terrorism and radical Islam. AMOT was created by Sayid Isaac, in collaboration with a team of colleagues. We all believe that the key to ending extremism in America, is through education. The idea for AMOT stems from the educational psychology of Jean Piaget.

AMOT aims to provide the evidence to engage that disequilibrium, in hopes of fostering assimilation and/or accommodation of schema that aligns with accurate information on Islam. We are not trying to convert people to Islam, but to help them gain a better understanding of the human condition inherent in Islam and all faiths. While Sayid is the creator of AMOT, his colleagues consists of people from various faiths, ethnicities, backgrounds, races and genders. It is our collective opinion that in order to create positive change in America, new information has to come from a diverse population that represents as much of the American population as possible.

As a unified team of educated individuals, we hope we can reduce inaccurate and ignorant misconceptions about Islam, and thereby contribute to reduce hate in our communities. The defining attribute which sets our page apart from other pro Muslim sites, is that we are actively posting educational materials and engaging in discussions with anyone who has questions and concerns. We pride ourselves on our fast response times and replies based on scholarly research.

Q: What are the future goals of the organization?

A: We seek to provide an online platform that will provide educational topics derived from scholarly sources and the Quran, to promote an understanding and respect for Islam and diverse Muslim communities. We provide a platform to promote intercultural and interreligious understanding, and to promote interfaith relationships with individuals of all faiths and beliefs.

We hope to make alliances with mosque and church leaders to brainstorm on how to repair rifts and promote the friendship between the faiths, with mutual respect and understanding. We protest extremist right wing agendas, events and websites that spread inaccurate information about Muslims. We hope to change media perspective/bias by providing positive events for them report about. We hope they see what we are trying to do, and reach out to us so we can explain our goals to a larger audience.

AMOT has a long-term goal of lobbying to enact an anti-extremist curriculum in our school systems.

Q: Are you planning any events or activities?

A: We plan on organizing college lectures educating people about Islam and denouncing terror in America (Sayid has one such lecture in the works). We will publicly protest acts of terrorism as they occur. We also assist other movements in protest that support AMOT and our message. We would like to get as many people talking about this as possible, and flood internet news sites with a coordinated message of peace and unity.

Q: How can people reach out to your organization, if they have any questions or would like to support you?

This article (Investigative Report: American Muslims in Opposition of Terror) is free and open source. You have permission to republish this article with a Creative Commons license with attribution to the author and AnonHQ.com. Join the conversation at www.anonboards.com