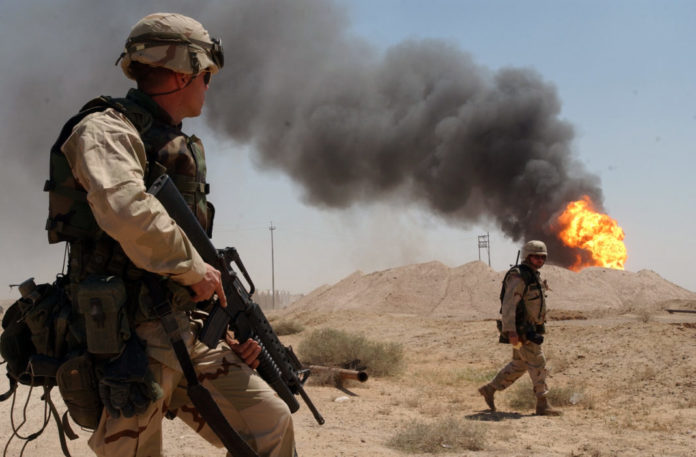 The war in Iraq was largely about oil. It’s a phrase that is becoming all too common. If we substitute Iraq for another country, such as Syria, Iran, Ukraine… and substitute oil for another commodity/geographical location essential to Western capitalism and authority, a troubling pattern emerges. We need to connect the dots through our overall awareness of geo-political moves, not so different from a game of chess. Unfortunately, there is a lot of ‘checkmating’ going on while the opponent struggles to stand up against the ulterior motive.

If you connect the dots throughout recent history in light of the Western Oil Agenda, the pattern can be traced as far back as 2001. In an article investigated and written by Dr Narfeez Ahmed,[1] the executive director of the Institute for Policy Research & Development, he discusses the unfolding strategy implemented toward Syria, Iran, and several other countries. He quotes a memo from the Office of the US Secretary of Defense only weeks after 9/11. It reveals the agenda to “attack and destroy the governments in seven countries in five years…Syria, Lebanon, Libya, Somalia, Sudan and Iran…” starting off with Iraq. Retired NATO Secretary General Wesley Clark goes on to say this is with the intention of controlling the region’s “vast oil and gas resources…”And we’ve got about 5 to 10 years to clean up those old Soviet regimes …before the next great superpower comes on to challenge us…” [2]

The words are damning.

In 2007, Greenspan, who served as chairman of the US Federal Reserve for close to two decades, wrote in his memoir In The Age of Turbulence: Adventures in a New World, that the “Iraq war was largely about oil.” When confronted about the quote on CNN in an interview with Matt Lauer,[3] Greenspan was quick to back pedal. He stated that if we had not cast war on Saddam Hussein, we would be paying upwards of $120 per barrel of oil as opposed to $80. Yes, it’s about the oil. He admits it. The dollar supersedes human misery. Today Iraq’s oil production is only .5 million barrels below its peak production before the war. Saying this, eighty percent is exported out of the country, and according to Antonia Juhasz for the CNN, this occurs while “Iraqis struggle to meet basic energy consumption needs.” The statistics are alarming, with a quarter of the population living in poverty while new energy-related jobs are imported labor. Juhasz goes on to expose the discussions in 2000 by Big Oil (consisting of ExxonMobile, Chevron, BP and Shell) for Iraq’s postwar industry. By February 2001 the logistics of invading Iraq were outlined. It was about “not the why (to invade Iraq) but the how and how quickly.”[4]

Today research is being conducted into the Iraq war and the cost to Iraq[5] as a society in terms of loss of life. Depending on the article you read, or the research paper you pull apart, the death toll moves between 500,000 upwards to 1.2 million lives lost in the name of oil. Some deaths are a direct result of the violence of war, and others indirect but “significant.”[6]

As the research continues, one must consider the future impact not only on Iraq, but Syria and surrounding countries. The Korean War resulted in upwards of 1.5 million deaths[7], some still unaccounted for, and Vietnam was in excess of 2.1 million[8]. Iraq, in terms of tolls, now joins the ranks of some of the great wars in history.