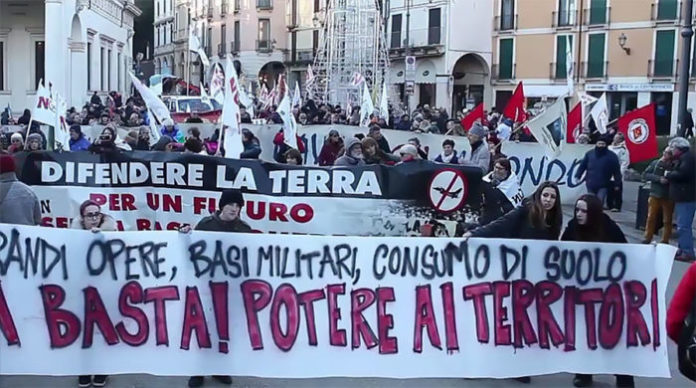 Despite recently closing hundreds of bases in Iraq and Afghanistan, the United States still maintains over 800 military bases in more than 70 countries and territories across the world. Apart from this, the base also serves as the headquarters of the United States Army Africa and the 173rd Airborne Brigade. In 2004, the United States military announced plans to expand the military base in Vicenza. The new base annex was planned to be located on the disused civilian Dal Molin Airport, roughly two miles from Caserma Ederle. The plan was first agreed by the then Italian Prime Minister Silvio Berlusconi’s administration. However, the succeeding government, led by Romano Prodi, initially opposed the expansion, but eventually agreed to the extension plan after losing support from the country’s parliamentary and judicial officials. Although the project has been completed, citizens in the Vicenza area say they have had enough, and are now taking to the streets to protest against the presence of United States troops in the area. According to the protesters, the United States’ global war agenda must end now.

Hundreds of protesters marched through the principal streets of Vicenza to protest the continued existence of the Dal Molin military base, recently. According to local media reports, the protesters gathered at the central Piazza Matteotti Square where they staged a rally under the slogan “No to War.” The demonstration was organized by the ‘Presidio No Dal Molin’ movement which opposes the presence of United States military bases near Vicenza and across the entire country.

It is said many anti-war activists, the majority of whom are from the provinces of Italy’s northern Veneto region, also joined the protest. The protesters marched through the city center waving the ‘Presidio No Dal Molin’ movement flags, chanting anti-war slogans. Some of the protesters held placards and large banners that screamed “Stop the global war!” and “Protect the land!” and “For the future without military bases!”

Others also shouted “Trump go home,” expressing solidarity with other protesters around the world who also took to the streets to show their discontent with the new United States president, particularly over his recent travel ban of some countries.

The protest was peaceful and successful, without any violent incident being recorded. The local police administration in Vicenza commended the organizers of the protest for ensuring a very peaceful march.

The mainstream media largely ignored the protest, which called for a peaceful world without war. This attitude by the media isn’t new. This type of protest calling for a peaceful world does not serve the interests of the media, given that many owners of the corporate media also have significant interests in the Military Industrial Complex. If there is no war, who would buy their weapons? If the weapons are not bought, how would they make profit?

However, the silence of the media didn’t stop the news of the peaceful protest in Vicenza from spreading. After the protest, many of the participants took to Twitter, telling the world what they’ve done. The images posted on Twitter were retweeted many times by anti-war activists around the world. The images went viral on other social media platforms as well.

Italy is said to have one of the highest numbers of United States foreign military bases in the world. In fact, the country is the second-largest state in Europe – after Germany – which has an American military presence.

Particularly for the Dal Molin military base, it has been a source of controversy for quite some time. In November 2016, while the United States was electing its political leaders, about 200 people gathered in Vicenza calling on Washington to rid its military presence in the area. Russia Today reports how the November protest ended up in clashes after around 50 people separated themselves from the main group and started throwing firecrackers at the United States military base. Police then responded by using tear gas to disperse the crowd. However, no injury was recorded during the chaos.

This article (Italians Take to the Street to Protest U.S. Global War Policy, Media Silent) is a free and open source. You have permission to republish this article under a Creative Commons license with attribution to the author and AnonHQ.com.