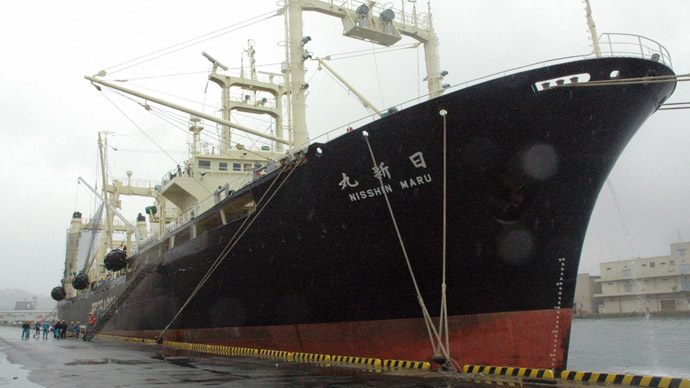 Our Oceans are acidifying, getting pumped full of radioactive Fukashima waste, and the US Navy continues to use its sonar to massacre marine animals for no reason. This perhaps explains why the Japanese whaling ships are returning empty-handed.

Two of Japan’s whaling ships have returned home from Antarctic with no catch onboard for the first time in nearly 30 years, local news reported. The news comes after a UN court ordered a halt to Japan’s annual “scientific” whale hunt. No need now, oh toothless tiger. The whales are all gone.

The 724-ton Yushinmaru and the 747-ton Daini (No 2) Yushinmaru returned to port in Shimonoseki, western Japan, which is considered to be one of the major whaling bases in the country, on Saturday.

1987, was the year Japan started its annual scientific hunt of whales in the Antarctic, according to Asahi Shimbun newspaper. The ships have never returned empty-handed since the program was launched.

Researchers who took part in the expedition claim to have focused on observing marine mammals from aboard the ships. They conducted the survey, and say that they only took skin samples of the whales. More likely they simply could not find anything to kill.

In 1986,under the International Whaling Commission (IWC), as whale populations plummeted toward collapse after decades of industrial-scale whaling, a moratorium against commercial whaling came into force.

Since then, Tokyo has abused a loophole in the whaling convention that allows killing whales “for purposes of scientific research.” Japan began whaling for “scientific research” back in 1987, saying that most whale species were not endangered.

In March 2014, the International Court of Justice ruled that Japan must stop whaling in Antarctica, saying that Tokyo had produced insufficient scientific data to justify the killing of whales for research. Tokyo canceled its Antarctic hunt, but then decided to move its venue to the Northern Pacific in the summer.

In September, Japan submitted a new plan to the International Whaling Commission and its Scientific Committee, which set an annual target of 333 minke whales for future hunts instead of 900. Japanese authorities then said that they planned to resume “research” whaling hunting by the end of 2015.

Japanese whaling is a centuries-old tradition… One that needs to stop soon, before there is nothing left. During the 2014 Antarctic hunt 251 minke whales were killed and 103 the previous year, according to data from Japan’s fisheries agency. In the Northwest Pacific, 132 whales were killed in 2013, and 92 off the Japanese coast. Meat from these whales usually ends up in food markets, because what’s “science” without some population sampling of your data…? Also, money.

Environmental organizations have repeatedly staged protests against whaling, which is also popular in Norway and Iceland. Heinous as whaling is, nobody has yet decided to act against the US Navy, which can’t even claim “science” or “food” when they massacre ocean life with their sonar tests.