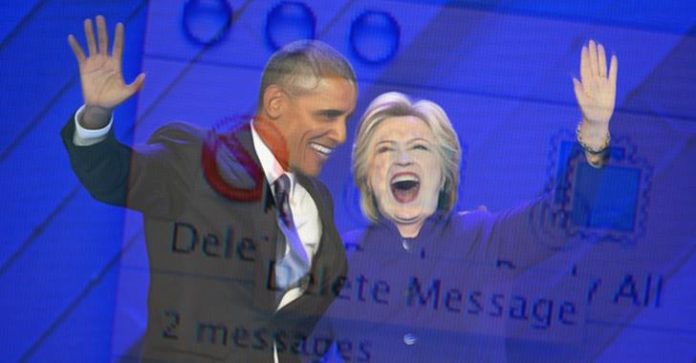 (ZHE) Last October, about 6 months after the New York Times first revealed the existence of the Hillary Clinton private email server, President Obama appeared on “60 Minutes” and denied any and all knowledge of her potentially illegal technology arrangements.  When asked point blank whether he knew about Hillary’s private email server, Obama responded, quite simply, “No.”

Of course, we now know from the FBI’s investigation notes that, in fact, that was a complete lie.  As we noted back in September, Huma Abedin’s interview with the FBI on April 5, 2016 revealed an email sent on June 28, 2012 from Obama, using an unknown pseudonym, to Hillary on her private email server.  So, either Obama is so incompetent that he didn’t recognize that Hillary wasn’t using a “.gov” email account or he simply lied in the following interview.  We’ll let you be the judge.

But now, per a report last night from the Wall Street Journal, we know that, not only did the Obama administration know about Hillary’s private email server they actually conspired, along with the State Department, to cover it up.  New emails, obtained by the Wall Street Journal via a FOIA request by the Republican National Committee, reveal communications between the White House and the State Department coordinating over how to minimize the potential fallout from Hillary’s email scandal so as to not impact her nascent presidential campaign.  We’re sure Bernie supporters must love that.

The first relevant exchange occurred between White House communications director Jennifer Palmieri and State Department spokeswoman Jennifer Psaki.  Shortly after, the March 2nd New York Times article on Hillary’s private email server, Palmieri, who was known to be leaving the White House to join the Clinton campaign, emailed Psaki to request that John Kerry not discuss Hillary’s email scandal on an upcoming interview with “Face The Nation” on March 15th.  Apparently, Psaki was able to coordinate with CBS to make sure Kerry wouldn’t be asked any “uncomfortable” questions and then wrote back to Palmieri that they were “good to go on killing CBS idea.”

Ten days after the story broke, White House communications director Jennifer Palmieri emailed State Department spokeswoman Jennifer Psaki to ask, “between us on the shows…think we can get this done so he is not asked about email.” That apparently referred to Mr. Kerry, who appeared in an interview on CBS ’s “Face the Nation” three days later.

“Agree completely and working to crush on my end,” wrote back Ms. Psaki.

A day later, Ms. Psaki added, “Good to go on killing CBS idea.” She continued, “And we are going to hold on any other TV options just given the swirl of crap out there.” Mr. Kerry wasn’t asked on CBS about the email server, though it isn’t clear how Ms. Psaki could have guaranteed that.

Teased by Ms. Palmieri about her use of the phrase “swirl of crap,” Ms. Psaki wrote back: “Ha I mean—the challenging stories out there.”

And, of course, you can see from the transcript of Kerry’s interview that he, in fact, was never asked a single question about Hillary even though other guests were questioned about the scandal later during the show.

Worse yet, Psaki, of the State Department, was seemingly rewarded for helping to “crush CBS idea” as she was given Palmieri’s position at the White House once Palmieri departed to join the Clinton campaign.

Ms. Palmieri had previously announced she would be leaving the
administration to join Mrs. Clinton’s campaign in mid-2015, but was still at the White House when she sent the email. Other emails show Ms. Palmieri helped arrange for Ms. Psaki to move from the State Department to the White House communications job Ms. Palmieri was vacating.

Unfortunately the stories don’t end there as other emails reveal coordination between the State Department and Hillary’s attorney’s all while the FBI was conducting an official investigation.

Ms. Samuelson was one of the attorneys who reviewed Mrs. Clinton’s emails to determine which were government-related and which were personal before providing the official ones to the State Department. She was interviewed by the FBI as part of its probe and granted limited immunity in exchange for turning over her laptop as part of the investigation.

But, as outrageous as this story is, we’re sure the mainstream media will simply bury it as yet another ring-wing attempt to “criminalize behavior that is normal” and promptly go back to demanding Trump’s tax returns.