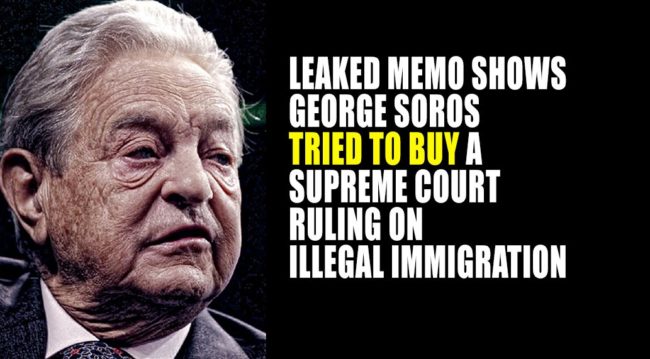 The fallout from the Soros’ hack continues to unfold. The most recent document shows how Soros’ foundation, the Open Societies Foundation, attempted to politically influence and the U.S. Supreme Court in favor of granting illegal immigrants amnesty in the United States.

It no secret that George Soros is a self identified progressive, whom has literally donated billions of dollars to U.S. democrats over his lifetime. It was no surprise when he chose to side with Obama and Clinton, in favor of granting 11 million illegal immigrants inside the United States’ legal amnesty. What is surprising though, is the tactics he and his organization utilize to go about this; going well beyond making political donations.

The email goes on to read how Soros’ panel on American affairs were “seeking to influence the Justices (primarily via a sophisticated amicus briefs and media strategy) in hopes of securing a favorable ruling in U.S. v. Texas.”

To do this, the foundation used bribes disguised as “infrastructure investment” on behalf of the Emma Lazarus Foundation and developed a comprehensive media campaign to shape/influence public opinion away from the “harsh anti-immigration rhetoric in the 2016 presidential campaign.” Instead they wanted to create political record, in the corporate media in hopes it would yield a more “favorable ruling” on the federal level.

What is the Emma Lazarus investment and what does this mean? The Emma Lazarus Foundation is a branch of the Open Societies Foundation, as their mission statement reads, the foundation exists specifically to enact  “comprehensive immigration reform and in the development of the immigrants-rights field in the United States—with the goal of bringing undocumented workers out of the shadows and onto a path toward naturalization and citizenship.”

The memo was dated February 2016. There is no way to actually measure how much Soros’ offices and their desired policy actually effected the views of Democrats in power, but there is one connection we can make. Obama was adamant that the Supreme Court uphold amnesty and like Soros, has been outspoken in his support of receiving refugees from foreign countries. During the same time Obama made these statements – enacting these policies – Soros paid over 100 million dollars to Democrats in 2015. Keep in mind, this is money donated by him personally, and does not include the efforts and money spent by the Open Societies Foundation or the Emma Lazarus Foundation.

Despite all of this, their efforts failed, Obama’s executive order on amnesty was voted down by the courts. The Republicans have continued to block refugees, but if there is anything this hack can show us, it is that the ties behind political elites and the worlds richest men is indeed real. Can you imagine what would happen if Rothchild was hacked; what stories would come out of that?

While nearly every single person who has ever existed has had an opinion on political matters, almost none of them have the power to hysically enact political policies on a federal level. Only the worlds most powerful people, and it is a small group.

If you are a man like George Soros, you can donate billions of dollars to politicians, and finance public policy. If you are someone Hillar Clinton, your actions can literally change the world – that is a lot of power.

The Democrat and Clinton hacks have revealed the same; revealed the corruption or hierarchy that really exists in political parties. All of these hack are extremely unsettling. The more that’s hacked the more it makes you question how much power the worlds richest people actually have on government affairs and how woefully unimportant we the citizens are in retrospect.

Source: The Free Though Project

This article (Leaked Soros Documents Reveal How He Tried to Buy the U.S. Supreme Court on Immigration) is a free and open source. You have permission to republish this article using a creative commons license with attribution to the author and AnonHQ. Join the conversations at www.anonboards.com.