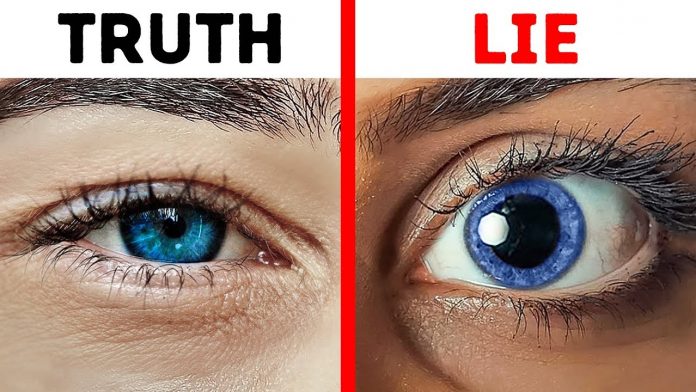 Imagine if you could clearly recognize when somebody is lying.

Crimes have been committed because of lies, relationships and families have been destroyed, and lives have ended. Were the majority of the people able to spot a liar, it’s fair to assume the world would be a different place, and this certainly includes politics.

How do we know if a person is nervous or lying?

When confronted on a serious matter, people can display anxiety even if they’ve done nothing wrong. It’s important to decipher whether a person is merely nervous, or whether they’re hiding something.

The following six keys are employed to spot a liar:

4. Be aware of aggression

Global reactions can be indicative of lying, but they can also be caused by various other factors. Taking crossed arms as an example; this could mean a person is being closed-off and therefore deceptive. However it could also mean a person is cold, or it could be comfortable for them to stand that way, or it could simply be out of habit.

Do not speculate. Analyze whether a reaction is in direct response to the question that has been asked using “timing and clusters.”

Timing: Look for a reaction within the first 5 seconds a question has been asked.

Clusters: Look for more than one reaction throughout the person’s response.

Observe the following 2013 testimony to Congress by former Director of National Intelligence, James Clapper. Clapper was asked about mass surveillance, and later admitted to giving a “clearly erroneous” testimony. With the knowledge since provided by Edward Snowden, it would be more accurate to say he blatantly lied. See if you can spot any of the immediate and ongoing reactions that would indicate deception:

Ignore truthful behavior. If someone is asked a question they’re comfortable answering, they will most likely give an honest-sounding answer. Both salesmen and politicians provide a good example of this, as both lie on a daily basis until they’re comfortable with it.

Part of lying entails creating the deception that the liar is a good person. Deceptive people want you to believe they’re “good folks,” so by ignoring truthful behavior, you’re preventing any bias from clouding your judgement. Managing your bias will help prevent you from being deceived.

Ivanka Trump (by her own admission), is good at this type of deception. Rather than answering uncomfortable questions, she will redirect to her own perceived accomplishments, values, or worth with a pleasant, soft-spoken voice. This can be seen in the following video. Likewise, watch as the news hosts allow themselves to be deceived through their own bias.

Those who testify before Congress are notorious for evading answers because Congress allows it. Signs of evasiveness include:

Exclusionary qualifiers: Vague answers that require follow-up questions. What are they cutting out?

Failure to deny: While a person may not admit to something, they’re not denying it either.

The following is a clip from the recent testimony to Congress by Gina Haspel, Trump’s pick for Director of CIA. In 2002, Haspel acted as chief of a CIA black site in which she personally took part in torturing prisoners. When asked if she thought the torture techniques were immoral, notice she not only avoids answering ‘yes’ to the question, but also fails to deny it.

Be Aware of Aggression

Aggression at a question or inquiry is a cause for alarm. We can see an example of this in the following video from October 5th, 2007, in which George W. Bush stated that the U.S. government “does not torture people.” We now know with the release of the Torture Report that this was a lie. Observe Bush’s composure as he feigns offense and outrage at the notion the U.S. government uses torture. Can you also spot any other telltale reactions?

Congress formulates questions for ‘yes’ or ‘no’ responses when possible. A direct answer is considered information that has been conveyed.

However as we’ve seen in numerous testimonies before Congress, including Gina Haspel’s (this is part of a cluster, btw), direct answers are often avoided. Instead, the individual will try to convince the questioner of something else, such as that they’re a good person, or they have good intentions. In Haspel’s case, rather than answering ‘yes’ or ‘no’ to the question of whether torture is immoral, she instead tried to convince Congress that the “CIA did extraordinary work to prevent another attack on this country.”

Other forms of manipulation used to convince include:

Referral statements: Go-to statements a liar will use repeatedly to convince people they didn’t do anything wrong, e.g. “it’s a witch hunt.”

Invoking Religion: When a person makes claims such as “I swear on a stack of bibles,” or “I swear to god.”

Perception qualifiers: Dressing up a lie. When people say things like “to tell you the truth,” “honestly,” and “trust me.”

Nonverbal cues are similar to cues a person might purposefully give when attempting to be subtle. A liar will give these cues subconsciously.

Long pauses before a response can often be acceptable, especially if a person is trying to remember a minute detail. However, a long pause after an obvious question, such as “did you kill that guy,” or “do you think torture is immoral,” should raise suspicion. This is a nonverbal cue.

Other nonverbal cues can involve conflicting answers, such as when a person says ‘yes,’ but shakes their head ‘no.’ This means the person is becoming flustered, and is unable to get their physical and verbal communications to correspond.

Anchor point movements are basically the involuntary movements of the points of the body that are anchored in place, whether to a floor (feet) or to a chair (ass). Someone who is lying may shift in their seat, or pace.

Grooming is yet another nonverbal cue. Rubbing and eyebrow, smoothing back hair, straightening a tie, can all be nonverbal cues to consider if you notice a cluster.

It can take years of practice to learn how to spot a liar, and law enforcement agents go through months, or even years of training. However, everyone is equipped with intuition, and utilizing the tips above can help you to sharpen that intuition, and avoid deception. With an even worse pathological liar in the White House than normal, we need all the help we can get.