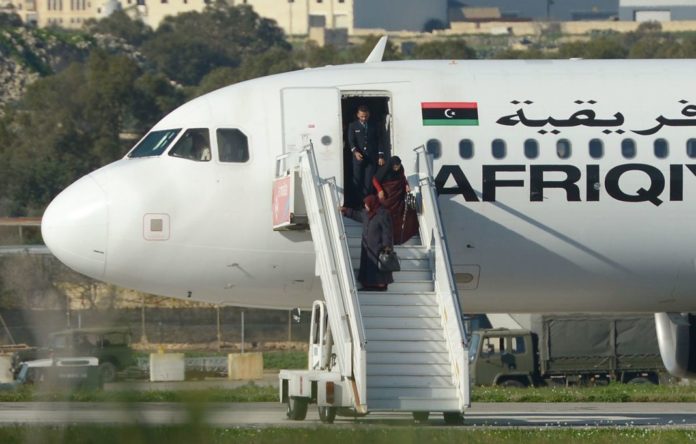 More than a hundred people have been released from Libyan aircraft at the international airport in Malta. The aircraft that was on a local journey in Libya was hijacked and diverted to Malta.

According to Joseph Muscat, who is the Prime Minister of Malta, his country is taking whatever it takes to sort this matter out. Since the releasing of passengers (80+ men and 20+ women including a child) who were transported in buses to the main airport building, there have been buses that are still parked nearby in case if more people are released.

The Prime Minister posted a tweet saying that the internal Libyan flight was directed to Malta for which security and emergency teams are standing by. He also tweeted about the releasing of passengers adding that the aircraft’s crew along with the hijackers are still on board.

According to the airport security staff, they have dispatched emergency teams around the aircraft as well as a negotiation team is present waiting for further instructions from the Joseph Muscat.

Furthermore, the control tower at the Malta International Airport was informed about the hijacking by the pilot when they tuned in the airport’s radio frequency, which was confirmed by the airport staff.

The local news channels are filled with this incident and reporting that the aircraft has hijackers that threaten to blow up the aircraft with grenades. The local media further reported that the hijackers say that they are pro-Gaddafi and they are going to let the passengers go but keep the crew on board to have their demands met, which they have not yet stated.

Colonel Moammar Gaddafi brutally died more than five years ago leaving his country in turmoil of violence and political instability.

However, the military forces and the emergency team are standing at a distance of more than a hundred meters from the aircraft. The airport authorities also reported that the aircraft’s engines were not set off until 45 minutes later after the aircraft had landed. This ultimately led the airport’s flight operations to take the action of cancelling and diverting all the inbound and outbound flights to the airport.

According to an official government statement, Malta’s National Security Committee is overlooking the actions at the airport.

The aircraft was to initially fly from Sabha, which is in the South of Libya to Tripoli, which is located in the north, a journey that takes no more than two hours. According to the airport staff, the pilot wanted to land the aircraft in Libya but the hijackers on board refused to go in with this call.

However, the long lasting battle between good and evil ended with the hijackers surrendering themselves to the military.

Source: The Guardian, The BBC

This Article ((BREAKING NEWS) Libyan Airlines Hijacked And Taken To Malta) is free and open source. You have permission to republish this article under a Creative Commons license with attribution to the author and AnonHQ.com.