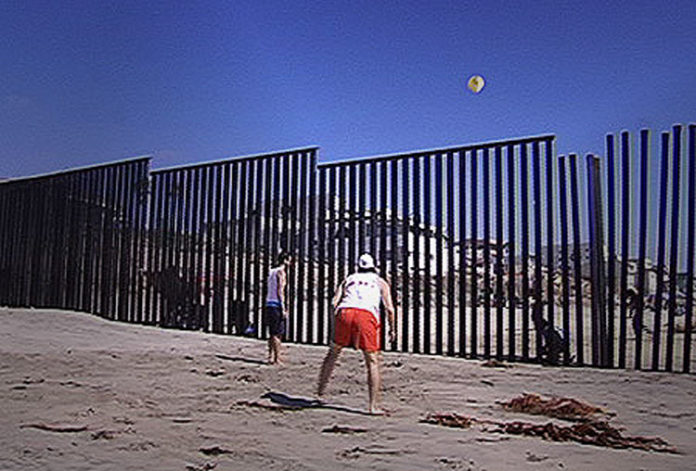 The annual tradition is intended to solidify positive transnational relations between Mexico and the US.

Political boundaries will never divide those in favor of unity, and locals in Naco, Arizona and Naco, Sonora (Mexico) are demonstrating this.

While mainstream media has a tendency to portray the border between the United States and Mexico as a war zone, this is a positive example of diverse populations engaging in play to raise awareness about peaceful collaboration.

Concerns like drug trafficking and illegal immigration will, of course, wage on and require solution(s), but this cheerful pursuit between locals along the Mexican-US border is worth sharing.

In between the two sister towns in Arizona and in Mexico, locals hold an annual volleyball game (which they call “Wallyball”) with the border serving as the ‘net’.

Reports Rafa Fernandez De Castro for Fusion, the game is like a “fast-paced version of volleyball.”

Termed the “Fiesta Bi-Nacional,” it’s intended to solidify positive transnational relations between Mexico and the US, despite tensions over migration and other issues.

The game has been an integral part of Fiesta Bi-Nacional since 1979 and has inspired similar competitions elsewhere along the US-Mexico border.

Shares Quartz, even the US city of San Diego and the Mexican city of Tijuana have taken up impromptu volleyball matches on the sand.

In the video at the top of the page, you can see a video of Wallyball from 2012.

“For us, it represents the celebration of the union of two countries. What’s unusual is that both the Mexican and US teams are playing at home, with the fence as the net.”
The border between Mexico and the United States is often clouded by prejudice and morbid media coverage, but this form of activism brings attention to the tense issue in a positive way.

Clearly, while both teams may be playing on their respective ‘turf,’ the game is less about where you’re from, and more about the fun to be had when differences are set aside.

What are your thoughts? Share in the comments section below.

This article (Locals Are Using The US-Mexican Border As A Volleyball Net To Promote Peace) is free and open source. You have permission to republish this article under a Creative Commons license with attribution to the author and TrueActivist.com