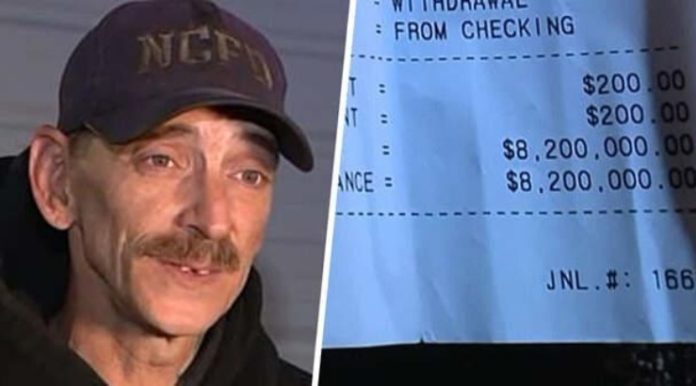 With some 80 million people expecting stimulus money to hit their bank accounts starting Wednesday in the biggest and unprecedented instance of the government passing helicopter money directly to Americans’ pockets in history, there are bound to be mistakes and errors.

A volunteer firefighter in New Chicago, Indiana was awaiting a $1700 stimulus payment but upon withdrawing a mere $200 from his dwindling available balance at an ATM last Friday was shocked to find his remaining balance $8.2 million.

Apparently, the US Treasury — or possibly the bank itself, it’s unclear which — made a huge mistake in making Charles Calvin an overnight millionaire.

The story originated in WGN9 Chicago and quickly went viral:

“I went to the ATM at the Family Express and once I withdrew $200 out of my account I looked at the available balance still left in my account,” he said.

Not believing what he was seeing, he ran his card again but it said the same thing.

The millions may have stayed in his account over the weekend before it appears someone on the other end realized the massive error. Calvin says he notified his bank upon opening in order to investigate the funds’ origins.

In disbelief he had gotten both a friend and store clerk to verify that what he was looking at was real.

He went to the clerk at the gas station where the ATM was to ask if there was something wrong with the machine, but no issues had been reported, he recalled.

“I showed her the receipt and she looks at the receipt, she looks at me, looks back at the receipt,” he told NBC Chicago in a separate interview. “She said, ‘You have this much money in your account?’ I said, ‘No, I am poor. I’m over here trying to get money out so I can pay my rent’.” — CNBC

By Monday the bank said they didn’t see that balance in his account anymore, but did verify his stimulus money was sent. CNBC later reported the bank thinks it was actually an ATM error.

“It kind of sucks,” Calvin told WGN9. “You go from being a millionaire one second then back to being broke again. But hey, once you’re poor you don’t have anywhere else to go but up.”

It’s still unclear exactly what happened, but its entirely possible that with Washington passing around trillions – it could very well happen again.

“Calvin still isn’t sure if this was an error on behalf of the federal government, his bank or the particular ATM he used, but he said he’s just glad he did end up with the amount he was entitled to,” WGN9 wrote.