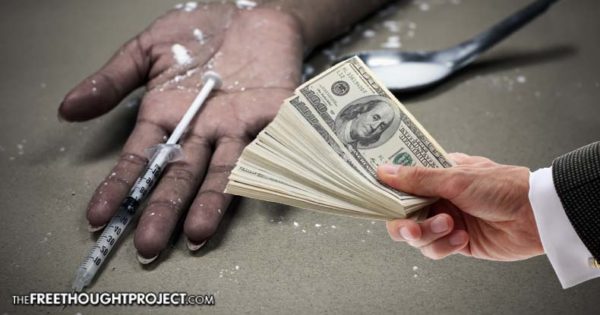 As we have said in a previous article, some companies, government institutions and agencies in the United States are sitting on tenterhooks as more and more states in the country push for legalization of marijuana, both for medical and other purposes. In short, Big Pharma fights marijuana legalization under the guise of paying policy makers large sums of money.

Particularly for the corporations, if marijuana becomes legal, it will break their monopoly and reduce their hefty profits. Of course, the majority of Americans now know that marijuana is an effective treatment for some diseases. The big pharmaceutical companies also know that if the plant is legalized nationwide, people will use it as an alternative to treat their ailments, instead of always relying on their drugs.

In this instance, the Arizona-based pharmaceutical giant, Insys Therapeutics, has donated a whopping $500,000 to a group known as Responsible Drug Policy (RDP). The RDP is opposing legalization of marijuana in the state. The state of Arizona is one of the many states voting this November to make sweeping changes and reforms to their marijuana laws. The state has introduced what is known as Proposition 205, a bill that would legalize marijuana in the state, but the so-called RDP opposes the bill.

Insys specializes in the manufacturing of an opiate spray known as Subsys (a sublingual fentanyl) to treat pain in cancer patients. According to a filing by Insys to the United States Securities and Exchange Commission in August 2016, all profits of the company come from the sale of the Subsys spray.

Apart from the drug being expensive and enjoying a monopoly in the country, it is also associated with severe side effects – including death. The Columbus Dispatch reports that one-third of Ohio’s 3,050 deaths caused by lethal drug consumption last year, was linked to fentanyl. According to the Arizona Capitol Times, the donation made by Insys to defeat the marijuana bill, is nearly four times more than the second largest donation from the Arizona Chamber of Commerce and Industry (ACCI).  The ACCI has also donated $110,000 to oppose Proposition 205.

When Insys’s $500,000 donation was made public, the company issued a statement claiming that it opposed the legalization of marijuana in the state “because it fails to protect the safety of Arizona’s citizens, and particularly its children.”

However, the company failed to address whether its opposition to the bill has something to do with its profits. In response, some marijuana advocates said Insys is displaying a high level of hypocrisy. This is because the drug the company is producing is killing people, instead of treating their ailment. There are many studies proving that marijuana is an effective pain relief for cancer people suffering. In July 2016, a study published in The Journal of Pain revealed that medical marijuana eases neuropathic pain in patients with spinal cord injury. The results showed great promise for marijuana as an alternative to the opioid pregabalin, which often must be discontinued due to side effects. This study adds to a growing body of research pointing to medical marijuana use for treating chronic pain. Many researchers have publicly said using marijuana to treat chronic pain should be welcomed in the United States, not frowned upon because of profit margins.

Big Pharma is actively working against medical marijuana legalization. They know that they will lose business if the plant is legalized. However, activists are determined, and we will continue the fight!

This article (Manufacturer of Deadly Drug 50 Times Stronger Than Heroin Spends $500,000 to Fight Medical Marijuana Legalization) is a free and open source. You have permission to republish this article under a Creative Commons license with attribution to the author and AnonHQ.com.