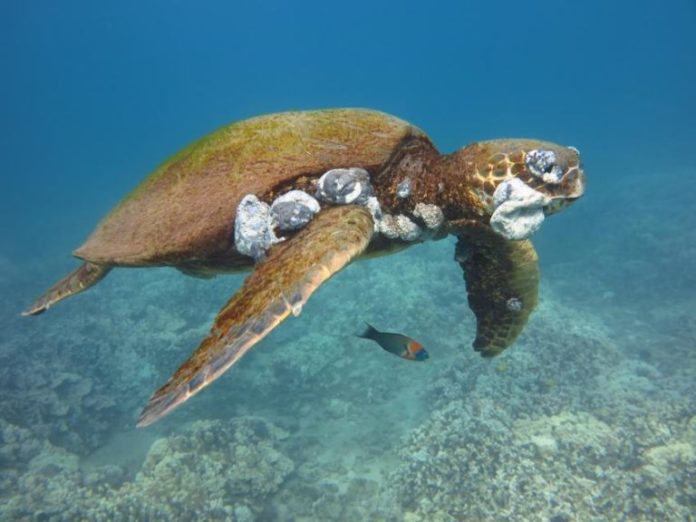 The newfound tumour forming disease is the number one cause of death in green turtles.

Scientists have recently discovered that pollution around the Hawaiian islands is causing lethal tumors in the endangered sea turtle population. The report, which was published in the peer-reviewed open access journal PeerJ, has explained that this is caused by high levels of nitrogen from both urban and farm runoff, which has poisoned the algae that is a major food source for the sea turtles. As a result, the sea turtles have developed deadly tumours on their flippers, eyes and internal organs.

Fibropapillomatosis, which is a tumour-forming disease, has been found to be the leading known cause of death in green turtles, according to Kyle Van Houtan, adjunct associate professor at Duke’s Nicholas School of the Environment. The research from the team of scientists from Duke University, the University of Hawaii and the National Oceanic and Atmospheric Administration (NOAA), found that the tumours were more prevalent in areas with high levels of nitrogen runoff, further strengthened by the theory that it is nitrogen-rich algae causing the illness.

The team examined how the algae stored excess nitrogen within itself via an amino acid called arginine. This led them to conclude that unusually high levels of arginine appeared in both highly polluted algae and in the tumours of diseased turtles. In comparison to this, the less polluted water that was tested, as well as tumour-free tissues, were both found to have lower arginine levels. An example of this is a non-native red algae species (Hypnea musciformis), which had especially high levels of arginine compared to the others species that were tested. Hypnea is a species that thrives in nitrogen-rich waters caused by nutrient pollution.

After their examinations, the research team found that the turtles had around 14 times more arginine in their bodies when compared with if the turtles were consuming native algae species in less polluted waters. Together with this, reports claim that they found that turtles were eating twice as much of the invasive algae species to get the same amount of calories they would gain from eating native algae. The study noted that,

“The energy and arginine content of (the algae) may therefore act as a sort of one-two punch for promoting this disease. And it’s not just green turtles, but fish and coral reefs that have similar diseases in these locations.”