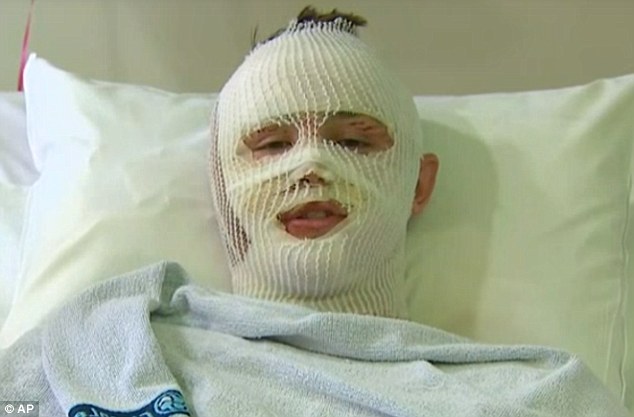 On March 22, Belgium was the center of the world with the terrorist attacks. Mason Wells, 19, was one very lucky young man. That’s how some would see it; others, perhaps would look at him as one of the unluckier ones to survive the bomb blasts.

The young American, Wells has survived his third terrorist attack in as many years. This time, rather than escaping unscathed, however, Wells was in close proximity to the initial blasts at Brussels airport last week. Suffering from minor burns to the right side of his face and right hand, while waiting in line, Wells contemplates the scenario with multiple mainstream media outlets, from his hospital bed. Wells, a Mormon missionary, was in Belgium during his two-year commitment that would keep him away from his family. He was scheduled to return to the US on Tuesday when the attacks happened. Wearing a pressure bandage around his head, rendering him unidentifiable, the world would be forgiven for wondering who this person is.

Wells was also in France during the Paris attacks, albeit he was removed from the situation and three hours away from the heart of the scene. In 2013 he watched as his mother ran the Boston Marathon, only a block away from where the bombs were detonated, killing three and injuring over two hundred.

Miraculously, Wells’ injuries to only the right side of his face and his hand should have been much worse if he was standing only 10-15 meters (he told CNN) from the first bomb. He states the blast lifted his body, with his iPad lifted from his hands, and “Fire was in front of [his] face,” he says. His watch and shoe on his left side “disappeared.” As he ran from the airport, his faith in God taking care of him, gave him the “calm,” he says, as the second blast went off.


The “future holds what it holds,” he says. The Mainstream media, arguably, have their Christian angel to present to the world, in the face of this barbarism. His parents have said “You can become bitter and angry about things or you can turn to God and let things go and try and turn it over to him; this is bigger than us, this is bigger than Mason…it makes me sick to know that many didn’t make it,” Mason’s father Chad Wells stated.

Mason’s brush with the attacks on multiple occasions hasn’t changed his intentions to join the US military after his missionary stint is completed, and after he heals.

This article (Survivor of 3 Terror Attacks talks with CNN) is a free and open source. You have permission to republish this article under a Creative Commons license with attribution to the author AnonWatcher and AnonHQ.com.