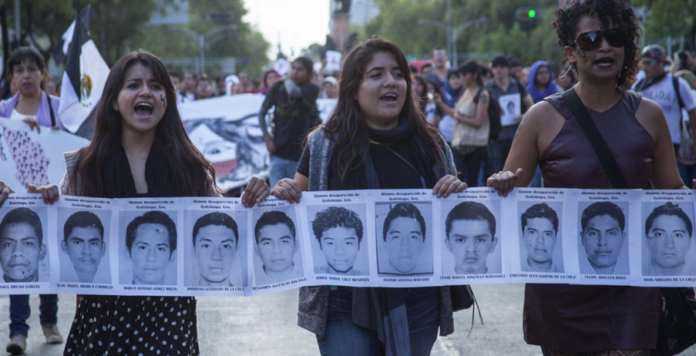 Written by: Josh Paniagua at theantimedia.org

José Luis Abarca, former mayor of the city of Iguala, has been charged with the kidnapping of 43 students that went missing in September 2014.

I’m sure many of you remember this story, but for the sake of context, let’s recap the events so far.

On September 26, 2014 in the Mexican city of Iguala, over 100 students from the Raúl Isidro Burgos Rural Teachers College of Ayotzinapa were traveling from their school in Tixtla to Iguala to a protest a conference led by mayor Abarca’s wife. At around 6 pm, the student’s buses were intercepted by municipal police under orders of Abarca, leading to a heated confrontation. By “heated confrontation”, I mean a shootout that left 6 people killed and 25 wounded.

During the shootout, several students fled to the hills for safety. The next morning during an investigation, authorities discovered the body of one of the students who had apparently tried to run into the hills. His eyes were gouged out and the skin of his face was peeled back to expose his skull.

Eyewitnesses say that after the shootout ended, the remaining students were rallied up and forced into police vehicles where they were then handed over to Cocula police. César Nava González, deputy police chief, had them moved to Pueblo Viejo where they were believed to be handed over to Guerreros Unidos, an active cartel in the Mexican state of Guerrero.

The events triggered a massive wave of unrest from families of the victims and protestors that resulted in attacks on government buildings and the resignation of Guerrero governor Ángel Aguirre Rivero. Mexican President Enrique Peña Nieto also faced international criticism and condemnation of Mexico’s state of security.

According to Tomás Zerón, head of criminal investigations at the federal prosecutor’s office, 97 arrests have been made including 36 municipal police officers, municipal officials, and several members and associates of the Guerreros Unidos cartel.

During interrogation, several shocking discoveries (or maybe not so shocking if you’re familiar with the abundance of political corruption in Mexico) were made. According to the testimonies of several officers and members of Guerreros Unidos, former mayor Arbaca had indeed ordered the interception of the students. In addition, it was also revealed that Maria de los Angeles Pineda Villa, Albaca’s wife, was the “key operator” in regards to local organized crime.

Albaca and his wife were arrested in Mexico City back in November 2014 and are now facing several charges including organized crime, money laundering, murder, and of course, kidnapping. Funny enough, Albaca was already facing these charges in relation to different cases.

“There is no evidence in the investigation suggesting members of the army or any other federal government security institution, had any participation at all in the disappearance of the students,” Zerón says.

However, in December shortly after the events, the Mexican magazine Proceso released a story claiming they had worked with the Investigative Journalism Program of the University of California in Berkley and uncovered evidence through leaked documents suggesting that the feds were actively involved in the attack. More specifically their story claims that federal forces were aware of the situation as it was happening and refused to take action, completely ignoring the incident until it was over.

Luis Pérez Martinez, a student who survived the attack, told prosecutors a bit of a different story. Mind you this testimony is translated from Spanish, so please pardon any strange grammar.

“I asked who were those who had been shot, manifesting the comrades who had been at the scene that were first municipal police, who with a representative vehicle patrol hindered their circulation, and some friends were lowered to make the patrol aside to let them pass, and that when they tried to move the patrol (…) came elements of the Federal Police and they were the ones who fired against my peers, wounding several of them, and killed one of them, not knowing the name of it, so that other peers down from the bus and run away to protect themselves from the bullets of federal, so got behind buses and other dropped to the floor, and that one of the federal began to smoke a cigar in the corner, and making gestures to them, and hence began to collect federal caps to avoid leaving evidence of the facts.”

I can’t stand beside this much, particularly because these “leaked documents” have not been made available to the public. They’re essentially saying that readers just need to trust that they have the evidence because they don’t want to show it. Personally, I’m going to need something a little more tangible than word of mouth for me to go anywhere beyond skepticism. Still, such testimonies and claims shouldn’t be ignored considering the noticeable (but still subtle) attempts by the Mexican President to sweep this whole thing under the rug. Fortunately, families of the victims and protestors have not let up in their demands for progress and information in the investigation.

The corruption of Mexican governments isn’t a mystery. It’s been a very clear and relevant problem for years, so to think that Mexico’s federal government would be exempt from any involvement in organized crime is a bit naive.

So were the feds involved in the attack and disappearance of these students? Was it all the doing of local governments? Share and tell us what you think.