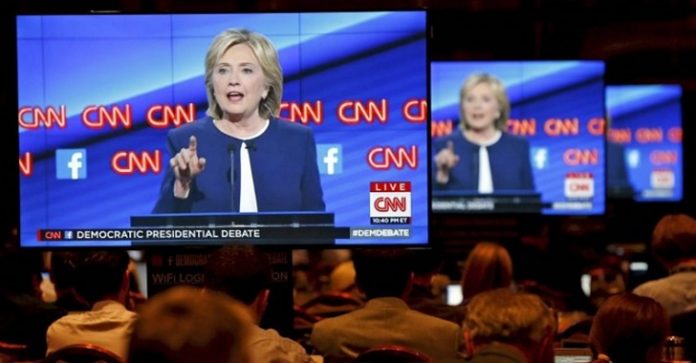 2016 is the year many, many Americans began to question whether or not our elections, and to a lesser extent, our democracy (insert “it’s a constitutional republic, big difference!” here) are rigged. As I’ve argued many times in the past year, there is plenty of evidence suggesting these skeptical Americans are, indeed, onto something with their suspicions.

But the corporate media has come out in defense of America’s “democracy” — and political elites are defending the system, too. In the wake of Trump’s recent rhetoric regarding the “rigged” system, the ruling class of the United States is peddling the fiction that somehow Trump’s irresponsible sensationalism is solely to blame for the newfound feelings of illegitimacy plaguing our elections.

And while Bernie Sanders fades into the matrix with his endorsement of Hillary Clinton and recent decision tohit the campaign trail for her, many of his supporters feel the same way Trump supporters feel. The Democratic primary was rife with inconsistencies, voter suppression, and suspect voting machines — all of which have culminated into several high-profile lawsuits alleging wrongdoing by the DNC. Coincidentally, Shawn Lucas, the man who was spearheading one of the lawsuits, was recently found dead on his bathroom floor. But this is all Trump’s fault, right? Or maybe Russia’s?

But rest assured, as POLITICO notes, even though voting inconsistencies became famous in the 2000 Bush v. Gore presidential election, Gore was a good boy and didn’t bother questioning the findings. He did the rightthing and conceded defeat despite vocal cries from his ardent supporters that he contest the election.

What’s interesting is that according to the Emmy-nominated HBO documentary Hacking Democracy, which followed the trail of investigators in Florida in an attempt to get to the bottom of the voter inconsistencies, the Gore campaign was made aware of verifiable issues with the vote counts but still encouraged the investigators to drop their cause and shut up. They were silenced by the candidate they were trying to help. This is what Trump should do if there are any questionable results in November, POLITICO suggests.

And boy, does Trump hate the media. He says it all the time. So much so that POLITICO thinks Trump could single-handedly do irreparable damage to the institution of mainstream media this election. This is yet another fiction being peddled by the self-serving corporate media. Instead of owning up to its waning trust among the general public, they would rather play the blame game. You see, long before Trump hit the 2016 political circuit, Americans had already started to lose trust in the corporate media. In September of 2014, Anti-Media reported, Americans’ trust in the media had reached an all-time low. As of October of 2015, only 7 percent of the country had a “great deal” of trust in the mainstream media — but this must be Trump’s fault. Or maybe we can pin this on Russia, too.

Another recent development that in my opinion doesn’t prove the elections are rigged per se — but rather, thatthey are illegitimate — is the overwhelmingly small turnout of voters who nominated both Donald Trump and Hillary Clinton. The two of them combined only attracted nine percent of the general public to vote for them in the primaries, meaning less than a tenth of the U.S. population anointed the nominees, one of whom will eventually be ruling over all Americans. Americans are hardly excited to get out and vote in elections nowadays — possibly because after years of believing unrepresentative politicians’ empty promises, they think the whole process has become futile.

But none of this really matters, anyway, since the U.S. is no longer a democracy or  constitutional republic. It’s an oligarchy. In short, as a 2014 Princeton University study concluded, “economic elites and organized groups representing business interests have substantial independent impacts on U.S. government policy, while average citizens and mass-based interest groups have little or no independent influence. The results provide substantial support for theories of Economic-Elite Domination and for theories of Biased Pluralism, but not for theories of Majoritarian Electoral Democracy or Majoritarian Pluralism.”

But again, as POLITICO notes, it’s not the actions of the oligarchy or the corporate media that have led voters to question the legitimacy of the system — it’s Trump’s words.

“…[M]any Republicans [elites] fear that Trump’s efforts to diminish people’s confidence in mainstream media, fair elections and politics itself will have a lasting impact,” POLITICO observes.

“‘The damage this is going to do to various institutions is going to be long term,’ said Charlie Sykes, a prominent conservative radio host in Milwaukee who has been one of the country’s most outspoken and consistent anti-Trump voices. ‘How do you restore civil discourse after all of this? He is a postmodern authoritarian who’s in the process of delegitimizing every institution — the media, the ballot box — that can be a check on him.’”

But what if it’s the oligarchic political system and the corporate media that have delegitimized themselves, and not some manufactured Trump conspiracy that has suddenly turned half the country into skeptical anti-establishment rebels? Maybe the corporate media’s collusion with the corporate government is the real conspiracy. Or maybe we should stop complaining and just blame Russia and Julian Assange — that seems a lot more convenient to the New York Times.

This article (Media Worried Too Many Americans Will Question Legitimacy of 2016 Election) is free and open source. You have permission to republish this article under a Creative Commons license with attribution to Nick Bernabeand theAntiMedia.org. Anti-Media Radio airs weeknights at 11pm Eastern/8pm Pacific. If you spot a typo, email[email protected].