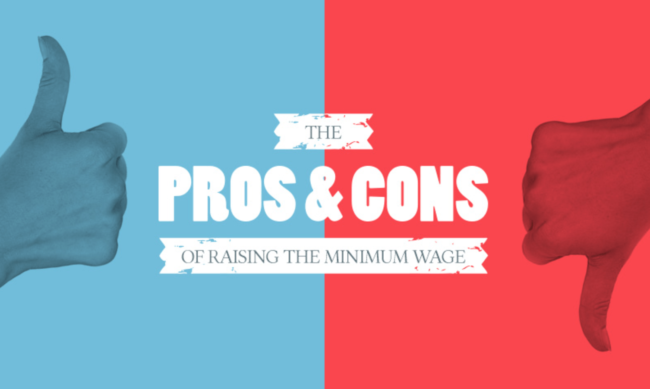 Two US states California and New York have passed landmark legislation this week agreeing to raise the minimum wage 50% from 10$/hr to 15$/hr. The policies will not be implemented immediately but by the year 2018 for New York and 2022 for California the legislation will take full effect. Liberals hail this as a great first step towards addressing the uneven rise of wages compared to inflation which will increase the quality of living for millions of employees state-wide. Conservatives contend this legislation as an economic disaster which will only result in hundreds of thousands of low income workers loosing their jobs.

Political ideology aside it is a fact that wages have not kept up with the cost of inflation and the average American does make less today comparably to what the average American made in the 1960’s and 1970’s. In recent years with the federal stimulus and expansion of our monetary supply, inflation rates will only continue to increase. In this way a minimum wage hike is deemed necessary. In 2014 a conglomerate consisting of 600 economists and 7 Nobel Prize winners wrote and open letter to President Obama urging the country to raise the federal minimum wage surmising that:

“In recent years there have been important developments in the academic literature on the effect of increases in the minimum wage on employment, with the weight of evidence now showing that increases in the minimum wage have had little or no negative effect on the employment of minimum-wage workers, even during times of weakness in the labor market. Research suggests that a minimum-wage increase could have a small stimulative effect on the economy as low-wage workers spend their additional earnings, raising demand and job growth, and providing some help on the jobs front.”


A study of small business owners from July of 2015 actually showed that 60% of entrepreneurs supported a minimum wage increase for their employees citing economic benefits as a result. As one owner said, raising the minimum wage “would immediately put more money in the pocket of low-wage workers who will then spend the money on things like housing, food, and gas. This boost in demand for goods and services will help stimulate the economy and help create opportunities.” This is a commonly liberal belief that tax breaks to the rich do not work because they will simply keep the money for themselves and will not equitably invest it back into society. In order to expand the economy, liberals say, we must put more money in the hands of the ‘common man’ who is more apt to spend their earnings – thus benefiting the entire economy.

The Department of Labor, members of the Presidential cabinet have put together a detailed list of questions and answers which reflect a positive view of wage increases including the statements and studies listed above. Learn More Here: http://www.dol.gov/featured/minimum-wage/mythbuster

Conservatives point to the fact that by raising the minimum wage we are paying hundreds of thousands, millions of people more money without increasing the amount of money available within the economic system. This can only result in two things, an increase in the costs of goods and services charged by businesses and a decrease in the overall workforce.

Conservatives will argue, though everyone would like to make more money you have to realize how this action would effect the people giving money to the working class in the first place. Simply put, raising the minimum wage increases the cost of running a business. To cover this new expense businesses/employers will have to lay off a certain number of employees to maintain the same level of net profit they did before the legislation. As the economist in the video above points out, statistics estimate that nearly 1.1 million employees could expect to be laid off as a result of this legislation in these two states alone.

Furthermore, raising the minimum wage prices people out of the workforce. The reason many people do not make more than minimum wage today is because they do not have the skill set, education or training to justify a higher salary. If the work force is cut and you are one of the previous minimum wage workers to get laid off, it is going to be exponentially harder for you to now find any new job. With more unemployment and higher wages comes more competition for any new available positions. If you already did not have the skills, education and training before this legislation you run the risk of being priced out of the market entirely after the legislation. Forcing many families to move and uproot.

Raising the minimum wage further hurts businesses by increasing taxes upon that business. For example, some businesses are taxed according to payroll. The more workers you have and the more you pay them, the higher the taxes you must pay. When we look at Medicaid and Social Security, both the employee and employer pay the same amount in taxes. If the minimum wage is increased from 10$ to 15$, employers are now paying 6.2% in taxes on 15$ than they were at 10$. So not only does this legislation force business to pay more money to each individual employee, but they must also now pay more in taxes to the government at the same time.

US businesses and corporations already operate under some of the highest tax burdens in the world. In a time of recession when entrepreneurship and small business ownership are significantly declining, we can not continue to hamper peoples aspirations to be in business. In fact it is the duty of the government to do the exact opposite of this.

Australia has a minimum wage much higher than here in the United States, in fact it is 15$/hr just as this new legislation puts forward. It sounds nice at first but its not until you dig a little deeper into the economics of it all that you understand the pitfalls of such a high wage. For example if you go into a store and buy a bag of Doritos in Australia this will cost you 4.50$ compared to 2$ in the USA. So as conservatives contend it is not as simple as raise the minimum wage and people will have more money for a better life. All the money being spent buy businesses to cover the new minimum wage has to come from somewhere. This comes in the cost of good and services to customers and a decrease in the total workforce.

This article (The Minimum Wage Debate) is free and open source. You have permission to republish this article using a creative commons license with attribution to the author and AnonHQ. Join the conversations at www.anonboards.com