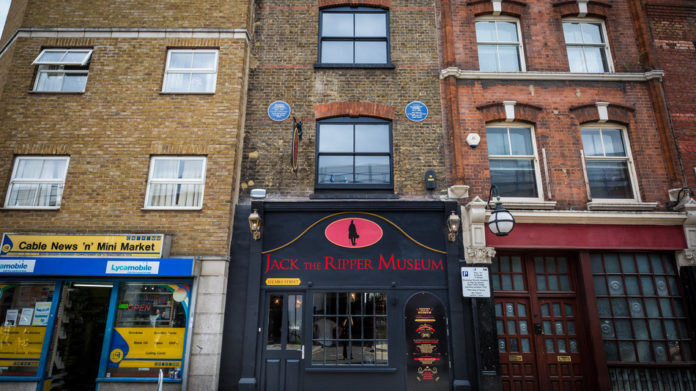 Britain’s newest museum was touted as a project to “recognise and celebrate the women of the East End—the famous, the infamous, and the anonymous—who have shaped history,” by Mark Palmer Edgecumbe, the former head of diversity, talent, and inclusion at Google, in August 2014. It was billed as the only dedicated resource in the East End to women’s history, showcasing 150 years of the social history of London’s women, and the first such museum in England, following the closure of the Women’s Library in 2013.

However, when the museum eventually opened in August this year, residents and business owners were aghast to see Jack the Ripper written across the signage. To accompany the name, a silhouette of the mysterious serial killer—infamous for mutilating and brutally murdering women, especially sex workers, in East London between 1888 and 1891—was also featured on the sign. The original planning application approved by London’s planning council, featured images of British Suffragettes such as Women’s Social and Political Union founders Annie Kenney and Christabel Pankhurst. In the museum’s initial proposal, Edgecumbe argued that “despite the immense contribution of the women of the East End to the historical, social, political and economic development of the United Kingdom, no museum exists to showcase their achievements.”

The museum, which now showcases the murderer’s story and essentially glorifies violence against women, has sparked outrage among community campaigners, who say they were misled. A public campaign led to a series of protests outside the museum from residents, women’s rights campaigners and Greenpeace, among others. Dr Lisa Mckenzie, a research fellow at the London School of Economics, branded the museum sexist for its portrayal of the women killed by the Ripper.

“When the Ripper museum applied for planning permission it said it was going to be a celebration of the lives of East End women. What we have got is a gory, grubby museum about Jack the Ripper. It is pretty horrific and glorifies the events. There is also the issue of gentrification here. This museum is not at all helping the local community,” she said.

“We feel we have been completely hoodwinked and deceived. My neighbour thought it was some kind of sick joke,” said film maker Julian Cole.

In response to the criticism, Edgecumbe clarified:

“We did plan to do a museum about social history of women but as the project developed we decided a more interesting angle was from the perspective of the victims of Jack the Ripper. It is absolutely not celebrating the crime of Jack the Ripper but looking at why and how the women got in that situation in the first place.” The museum at 12 Cable Street is a museum dedicated to the history of the East London in the 1880’s, providing a serious examination of the crimes of Jack the Ripper within the social context of the period. For the first time it tells the story of the man known as ‘Jack the Ripper’ from the perspective of six of the women who were his victims.

The architect behind the museum’s design, Andrew Waugh, founder and director of Waugh Thistleton Architects, said the museum was “salacious, misogynist rubbish”.

“The local community was duped, we were duped. They came to us and said they had no money but that this is a real heartfelt project. It is incredibly important to celebrate women in politics in the East End. We really ran with it. We did it at a bargain-basement fee, because we thought it was a great thing to do.”

Edgecumbe recently revealed he has received death threats from anti-gentrification protesters — but insisted he won’t give in to their “bullying” tactics.

“They are absolutely trying to intimidate me. They have made personal attacks on me, my friends and my family. I’ve had death threats from them and they have told me they are going to burn my museum down and that they know where I live and I should watch my back. Everything about the museum protesters, when they say they are going to come and burn us down, reminds me of Hitler’s brown shirts and the fascists. I’ve never given in to bullies and I’m not about to now.”

This Article (Museum Meant To Celebrate East End Women Showcases Grisly Work Of Jack The Ripper) is free and open source. You have permission to republish this article under a Creative Commons license with attribution to the author and AnonHQ.com.