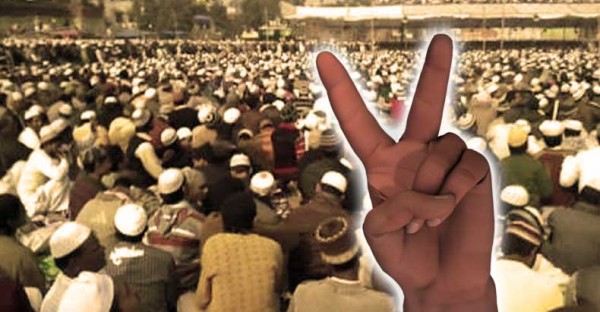 The self-proclaimed Islamic State of Iraq and Syria (ISIS) has managed to somehow increase the perception of non-Muslims especially people in Western Nations that Islam is a violent religion.

With what happened in the French capital, Paris last month and the recent mass shooting in San Bernardino, United States, hate and Islamophobia have increased significantly in Western Nations.

In the United States, Donald Trump who is aspiring to occupy the country’s top office has called for a halt to all Muslim migrating to the country, basing his argument on the attacks of ISIS and other radical groups.

But despite all these odds against the majority Muslim population who are suffering as a result of the few bad nuts among them, some have taken it upon themselves to publicly condemn the actions of the bad nuts, and tell the whole world that their actions do not represent Islam. At a recent religious gathering of Muslims in the city of Amjer, India, over 70,000 Islamic clerics issued a religious fatwa condemning ISIS and other terrorist organizations that are hiding behind Islam to commit heinous crimes against humanity. Fatwa is the term for the legal opinion by an Islamic qualified jurist pertaining to the Islamic law.

The fatwa slamming the terrorist organizations was issued at the annual Urs festival. The festival is a yearly gathering of Muslim clerics to commemorate the death of Moinuddin Chishti, a Sufi Islamic cleric and scholar.

Also, the clerics made a passionate appeal to the Global Media, especially the Mainstream Media to stop referring to the terrorist groups as Muslims. According to the religious leaders, true believers of Islam do not support extremist perversions of the religion.

The clerics said extremist groups in Islam are hated in almost every country with large Muslim population. Recently, a research conducted by the Pew Research team also confirmed what the clerics said. The Time of India reported on the gathering that “On the last day of Urs-e-Razvi of Dargah Aala Hazrat, nearly 70,000 clerics came together and passed a fatwa against terrorist organizations, including IS, Taliban and al-Qaida. These are “not Islamic organizations,” the clerics said to a sea of followers, adding that the members of these outfits were “not Muslims”. Noori said he would like to request the media to stop calling terrorist groups “Muslim organizations”. Hazrat Subhan Raza Khan, chairperson of the influential Dargah Aala Hazrat, said that following the Paris attacks, it was decided that a fatwa should be passed at the Urs this year, so the message went out loud and clear that the Muslim community condemns terrorism”.

Meanwhile, the Free Thought Project reports that across the globe, many true Islamic groups are fighting back against a perception that Islam is an extremist religion. One of the world’s largest Islamic groups, Nahdlatul Ulama which claims membership of over 50 million, has come forward to rebuke the extremist ideology followed by ISIS known as Wahhabism. Wahhabism is the ultra-conservative reform movement based in Saudi Arabia that advocates for puritanical laws from the time of Islam’s origins. According to Islamic scholars, Wahhabism rejects the modern notion of religion as a purely private activity and the separation of church and state. Particularly for ISIS, the group is highly committed to Wahhabism principles, using its religious textbooks and embracing its hardline tradition of killing unbelievers. That is why ISIS is persecuting non-Muslims in territories they control in Iraq and Syria.

However, concerned observers of the recent Islamophobia unfolding in Western Countries say rather than allowing corporate media and politicians to sway public opinion through fear and panic against Islam in general, individuals must reject these broad assertions and labels by understanding that the overwhelming majority of Muslims reject these extremist doctrines. By doing this, and treating Islam with respect like other religions, the extremists will be defeated.

This Article (Muslims Fight Back: 70,000 Muslim Clerics Issue Fatwa Against ISIS And Other Terrorist Organizations) is free and open source. You have permission to republish this article under a Creative Commons license with attribution to the author and AnonHQ.com