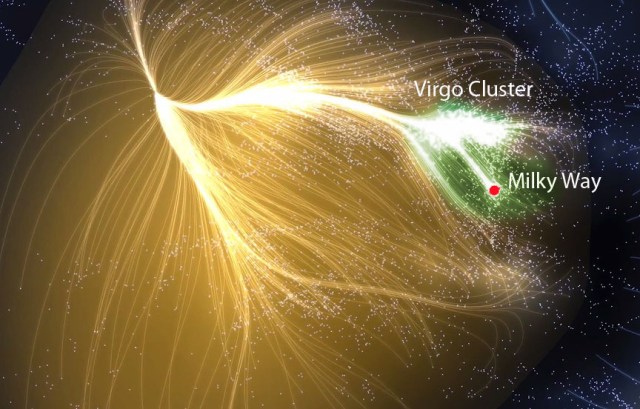 The Earth and the solar system are located in the Milky Way. That’s not a discovery. The Milky Way is part of a broader supercluster of 100,000 galaxies stretched out over 160 megaparsecs (520 million light-years) known as Laniakea. That’s a discovery.

In a fascinating study, a team of scientists led by R. Brent Tully of the University of Hawaii have mapped more than 8,000 galaxies in our immediate vicinity, and discovered that the Earth’s galaxy lives near the edge of the Laniakea supercluster. National Geographic explains:

After studying the peculiar motions of some 8,000 galaxies, Tully and his colleagues could identify which gravitational center controlled the Milky Way and its galactic neighbors. They used that information to define the extent of the supercluster. Simply put, galaxies, whose motion is controlled by Laniakea’s Great Attractor — located in the direction of the constellation Centaurus — are part of the Laniakea supercluster.

Galaxies that are being pulled toward a different attractor are in a different supercluster (the next one over is called Perseus-Pisces), even if they’re right next to each other in the sky. Within the supercluster, galaxies are strung like beads on cosmic strings, each anchored to the Great Attractor. The Milky Way is at the fringe of one of those strings, perched on the edge of the Local Void—an area where, as the name suggests, there isn’t much to be found. Laniakea — which means “immeasurable heaven” in Hawaiian — is much, much, much bigger than astronomers had previously realized. Just imagine: Each galaxy contains millions, billions [The Milky Way contains up to 400 billion stars], even trillions of stars, and Laniakea is home to 100,000 galaxies. Any guesses how huge this newly discovered structure — with an approximate mass of a hundred quadrillion solar masses — would be?

The Virgo supercluster, previously defined as our home supercluster estimated to be spanning some 100 million light-years, is now considered just an appendage of the larger Laniakea. In an interview with National Geographic, Tully said about the discovery:

“Seeing a map gives you a sense of place. For me, having that sense of place and seeing the relationship of things is very important in terms of understanding it… We’re finding the edges, the boundaries. It really is similar to the idea of watersheds on the surface of the planet. The edges of watersheds are pretty obvious when you’re in the Rocky Mountains, but it’s a lot less obvious if you’re on really flat land. Still, the water knows which way to go.”

If the immeasurable heaven is so gigantic, how did Tully and his team of scientists figure out this structure existed? When they started analyzing the motion of over 8,000 galaxies, the scientists could map out certain patterns and found that though the universe overall has been expanding gravity is also pulling some galaxies toward each other. The new study, published in Nature, describes a novel way to define where one supercluster ends and another begins. Watch the video below to know their discovery in detail:

Elmo Tempel, an astronomer at the Tartu Observatory in Estonia, believes having a clear method for identifying super-clusters is expected to help scientists piece together a better idea of how galaxies, including the Milky Way, evolve. He told Reuters, “Hopefully, this will initiate observational programs to carry out additional direct-distance measurements of galaxies.”

Astronomers have spotted the BOSS Great Wall, a vast superstructure of 830 galaxies that span roughly 1 billion light-years across and represents the largest structure ever found in space so far [with a total mass perhaps 10,000 times as great as the Milky Way]. The BOSS is two thirds bigger than the previous record holder, the Sloan Great Wall discovered in 2003.

Lead author of the study, Heidi Lietzen of the Institute of Astrophysics at the University of La Laguna in Spain, observed: “It looks like we have a structure that is bigger than anything else: like two Sloan Great Wall scale structures right next to each other. The question now is: is it too big for our cosmological theories?” But not everyone is convinced that the BOSS is truly the biggest, though. Allison Coil of the University of California in San Diego told New Scientist, “I don’t entirely understand why they are connecting all of these features together to call them a single structure. There are clearly kinks and bends in this structure that don’t exist, for example, in the Sloan Great Wall.”

While Tully agreed that the BOSS Great Wall is indeed the biggest structure in the universe we’ve found so far, he doesn’t think it will change our theories of how the cosmos gets its shape.

“It is not surprising that if we look at a bigger patch of the universe we find something bigger. But not so much bigger that it disrupts the generally held view of structure formation. What’s more, the BOSS Great Wall won’t be the last word on giant superstructures — there’s plenty of universe left to explore. Look in a new place and you’ll find something new.”

This article (Mystery Solved: Scientists Find The Earth’s Official Address) is free and open source. You have permission to republish this article under a Creative Commons license with attribution to the author and AnonHQ.com.