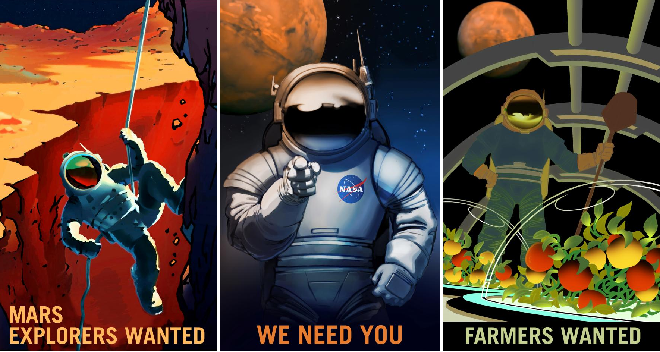 The word is out and people are already talking about the new NASA program designed to recruit people to move to Mars and build a new society. According to reports, NASA is looking for “farmers, teachers, technicians, surveyors and explorers“. Anyone handy enough, healthy enough and physically capable enough to participate in building a sustainable habitat for humans of the future. It should be noted that none of the experiments are set to launch until after 2030.

Despite the fact that humanity has not even been back to the moon since 1969, scientists have been planning theoretical trips to Mars like this for decades. Remember that time Newt Gingrich said if he was elected President in 2012 “that there would be a space colony on the moon by 2020“? Didn’t work out so well for good ole Newt, but it looks like his pioneer spirit didn’t die.

Mad scientists, I mean geniuses like Elon Musk, who just happens to want to drop thermo-nuclear bombs on the ice caps of Mars to stimulate water flow therefor life, warns that inevitably the first trips to Mars will most likely result in large causalities. I do not think it takes a true genius to understand why.

This may be one of the most significant missions in human history. It could be one of the coolest things you do in life, it could be the last thing you do in life, but the unimaginable is slowly starting to become real. In conjunction with their latest effort, and as we become closer to the possibility of the mission, NASA has also begun releasing posters in an attempt to inspire children to keep ‘shooting for the stars’ – to believe in American ingenuity and building towards a better future.

So I wonder, who’s choosing to make that trip and work on Mars?

This article (NASA Actively Recruiting Civilian Volunteers for Future Mars Trips/Habitation) is a free and open source. You have permission to republish this article using a creative commons license with attribution to the author and AnonHQ. Join the conversations at www.anonboards.com.