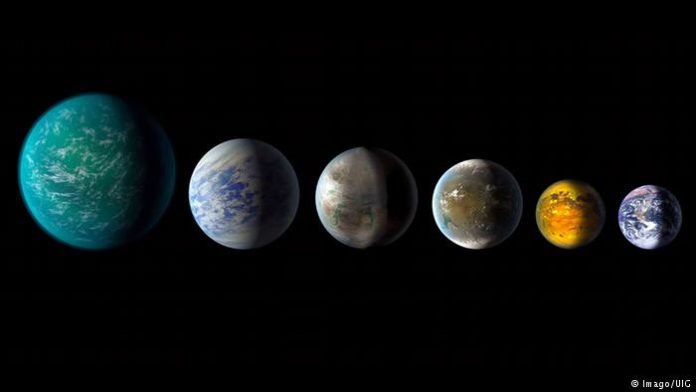 Using its planet-hunting Kepler telescope, NASA has discovered an entire solar system with as many planets as our own. The discovery of two new planets orbiting the Kepler-90 star, a sun-like star 2,545 light years from Earth, means the solar system has exactly as many planets as our own [that’s eight planets, if you don’t count Pluto]. The new findings also suggest other solar systems, which remain unknown to us in data already collected, are ripe for discovery.

The two new planets were found using AI technology designed by Google, accelerating the hunting process. Google trained the AI to sift through Kepler data at rapid speeds. The artificial intelligence technology will now be used to pick through more troves of signals, as many as 35,000, making future discoveries highly probable. Over the last four years, the Kepler telescope has detected 50 planets in what is considered the ‘Goldilocks Zone,’ one small part of the universe. Ten new Earth-like planets were discovered in this zone just outside our solar system this year, with NASA claiming they could all potentially support life.

But for the latest exciting discovery of an eighth planet, dubbed Kepler-90i, means there are other solar systems out there just like ours.

As displayed by NASA, the Kepler-90 Solar System consists of larger planets positioned further away from its sun and the smaller ones orbiting on closer circuits. Kepler-90i is positioned similarly in its solar system as Earth is in ours. Remarkably, it is also the closest in size to Earth.

NASA released a statement saying the Kepler-90 Solar System appears to be going through the same cooling down process as our own system, where larger planets consisting of ice clumping together help produce their size. Measuring the distance between the planets and the sun, the Kepler system’s eight planets are within the equivalent distance of the Earth to the Sun. This makes the typical orbit on Kepler-90i only 14.4 days, whereas Mercury, in comparison, is 88 days.

What does differ on Kepler-90i is its surface temperature of 800 degrees Fahrenheit, or 426.66 degrees Celsius. This in itself makes life as we know it on the rocky planet unlikely. However, the Kepler-90i discovery is not the only remarkable finding. In the Kepler-80 system, a sixth Earth-sized planet was found, displaying a mutual gravity with neighbouring planets, making it an extremely stable system.

These discoveries are producing unprecedented data for space research in exoplanet hunting. In years to come, it may very well lead to the discovery of planets that can support life similar to that found on Earth.

NASA streamed a media teleconference this week, announcing their latest Kepler discovery. Future events on the Expedition 54 launch, as well as coverage on SpaceX, will also air Dec 17 and Dec 19.