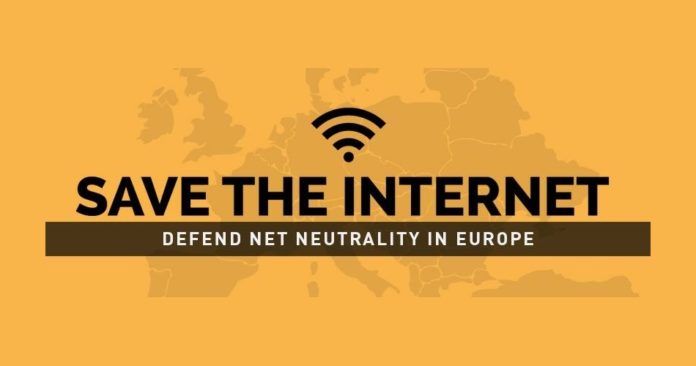 The European Parliament has rejected a series of amendments to a regulation intended to safeguard and strengthen net neutrality in the EU. The rejected amendments included proposals that would have ensured there was no network discrimination, all Internet traffic would be treated equally, ISPs would not be allowed to become gatekeepers, and ISPs would have only been allowed to manage traffic when it was congested.

According to the Commission, “the new rules protect the right of every European to access the content of their choice, without interference or discrimination”. The new legislation, “aimed to safeguard the open Internet”, however, allows the creation of Internet fast lanes for “specialized services” and lets Internet service providers (ISPs) offer so-called “zero-rating” products —apps and services that don’t count toward monthly data allowances — without restrictions.

Advocates for net neutrality say the rules contain a number of loopholes which could lead to the creation of a “two speed” Internet in the European Union.

Fast lanes, where big Internet companies pay ISPs for priority access to make their websites or services load faster for customers, are in direct opposition of net neutrality because the practice put their rivals, especially young Internet startups, at a disadvantage.

In June, the Commission, while condemning “paid prioritization” or fast lanes, had said citizens would never be “unfairly blocked or slowed down”. However, the new proposal allows ISPs to create fast lanes for companies that pay through the specialized services exception. The exemption is intended to protect public services that require a stable, lightning-fast connection like remote surgery or a drone feeding live video back to firefighters.

Critics argue that the exception is too broad and that in many cases, it still allows ISPs to offer fast lanes by calling them a specialized service. Companies have reportedly tried to exploit a similar loophole in net neutrality legislation adopted in the US to create fast lanes for TV streaming services. The EU’s regulations allow zero rating, a practice whereby service providers allow users to access certain websites or applications without incurring any data charges. In other words, if a service is zero-rated, it doesn’t count towards a users’ bandwidth cap or usage costs. This means companies could pay ISPs to be zero-rated and receive preferential treatment – once again creating an unequal Internet.

This gives those companies a specific advantage when dealing with users with strict data limits, such as those on mobile Internet. Also, the ISPs can use zero rating as a tactic to encourage customers to adopt a specific service usually owned by them.

“If adopted as currently written, these rules will threaten innovation, free speech and privacy, and compromise Europe’s ability to lead in the digital economy,” Inventor of the world wide web Sir Tim Berners-Lee wrote in a blog.

ISPs would also be allowed to manage traffic congestion if it’s “impending”, though the proposal doesn’t offer a clear definition of “impending”. While there is consensus that ISPs should be able to manage traffic at times of congestion, and the proposal does outline clear procedures on how to do that, there are fears that the provision could be exploited to slow down or prioritize certain services at any time, not just during times of actual congestion. This could also be used as an excuse for discriminatory traffic management, using the justification that congestion was just about to materialize.

Part of the problem with the rules in their current form, argued Joe McNamee at the European Digital Rights campaign group, is that they are ambiguous. “As the text currently stands there is no indication as to how much abuse of dominance would be permissible under this arrangement,” he told the BBC. Under the new rules, ISPs are allowed to group some services into traffic “classes”, which can be sped up or slowed down at will. A video call, for instance, may be optimized because it demands fast connections, whereas email traffic may be allowed to lag. The EU proposal thus allows ISPs to engage in this discrimination at all times, which could distort competition.

Further, critics argue that ISPs will not be able to identify what “class” encrypted data fits in so they will simply put them in the slowest lane. This will discourage the use of encryption, and make the Internet less secure.

“If you delay encrypted traffic, then it’s very likely that less traffic will be encrypted. That’s something we don’t need… The development and use of high-grade encryption should be supported wherever possible,” says Rejo Zenger, a privacy advocate at Bits of Freedom, an Amsterdam-based digital rights organization.

This Article (Net ‘Duality’ In EU: Parliament Votes In Favor Of Tiered Internet) is free and open source. You have permission to republish this article under a Creative Commons license with attribution to the author and AnonHQ.com.