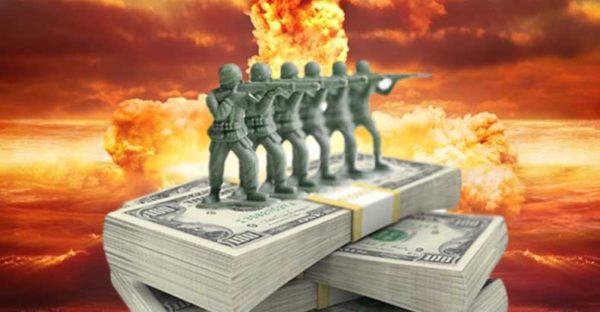 A new United States Department of Defense (DOD) Inspector General’s report has revealed that officials at the country’s defense headquarters cannot account for a whopping $6.5 trillion allocated by Congress to protect the country.

The United States defense spending has been rising over the years. In 2015, the country is said to have spent about $601 billion on defense, which is more than the next 7 highest spending countries combined.

According to the report published on July 26th 2016, officials at the Pentagon and the DOD failed to properly account for the transactions and data on monies allocated to the agency as part of the country’s defense budget over several years. The Free Thought Project reports that beginning in 1996, all federal agencies in the United States – including the Pentagon – were mandated by law to conduct regular financial audits.

Therefore, it was unclear for the Auditor General to specifically determine what the country’s defense officials spent the trillions of dollars allocated for wars, equipment, personnel, housing, healthcare and procurements on. Sensitive documents that should show a track of transactions on the money are missing, according to the Auditor General’s report. According to procedure regarding how money spending records should be kept at the Pentagon: for every transaction, there is a journal voucher that provides serial numbers, transaction dates and the amount of the expenditure. This procedure was instituted to ensure smooth future auditing process, and help auditors know how monies are spent at the agency. The Defense Finance and Accounting Service (DFAS), which serves as the agency of the DOD in charge of all the Pentagon’s civilian and military members, was supposed to document the journal voucher. The DFAS is based in the city of Indianapolis. However, the Auditor General’s report found that Pentagon officials have neglected this smooth record keeping procedure. Officials failed to furnish the auditors with the documentation of their transactions over the years, making it difficult for the auditors to know how and what the $6.5 trillion dollars was used for.

Even before this damning audit report, Reuters had earlier revealed in a special investigation that employees of the DFAS were routinely told by superiors at the Pentagon to take “unsubstantiated change actions” commonly referred to as “plugging” the numbers. The news agency said these “plugs” amounted to falsifying financial records, which is then used to create the appearance that the military’s financial data matched that of the Treasury Department. This makes the discrepancies in the financial data couldn’t be accounted for, and officials of the Pentagon can then divert money meant for official business for their personal benefit. The Auditor General’s report confirmed the Reuters investigation. The report said many of the problems occurred due to bookkeeping errors. It said the DFAS has failed to provide the necessary tracking information essential to performing an accurate audit of the Pentagon spending and obligations.

“Army and DFAS Indianapolis personnel did not adequately support $2.8 trillion in third quarter adjustments and $6.5 trillion in year-end adjustments made to Army General Fund data during FY 2015 financial statement compilation. We conducted this audit in accordance with generally accepted government auditing standards,” the Assistant Inspector General for financial management and reporting, Lorin T. Venable wrote in the report. The report also pointed out that thousands of documents that should have been on file showing spending at the Pentagon, have been removed and disappeared without any reasonable explanation. DFAS officials could not find where or who removed those documents.

The report stated: “DFAS did not document or support why the Defense Departmental Reporting System . . . removed at least 16,513 of 1.3 million records during Q3 FY 2015. As a result, the data used to prepare the FY 2015 AGF third quarter and year-end financial statements were unreliable and lacked an adequate audit trail.”

According to critics, the accounting errors and the missing documents highlight the poor decision-making and systemic corruption in the whole United States defense system, backed by the government. Meanwhile, while the Pentagon and the DOD can’t account for $6.5 trillion dollars of taxpayer funds, in 2014 it is said there were 47 million people – including over 15 million children – living in poverty in the United States.

Critics say the United States finds pleasure in wasting money on needless defense spending, which ends up in the pocket of corrupt officials rather than making sure that its citizens enjoy a better quality of life.

This article (New Audit Report: Officials Can’t Account for Missing $6.5 Trillion from U.S. Defense Headquarters) is a free and open source. You have permission to republish this article under a Creative Commons license with attribution to the author and AnonHQ.com