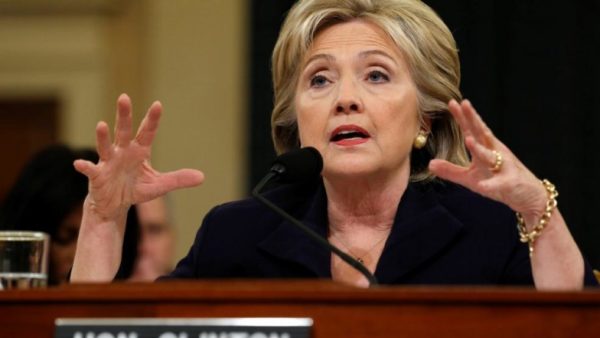 A new poll conducted by the Washington Post and the ABC News network, has revealed that the majority of Americans strongly disagree with the FBI’s decision not to recommend criminal charges against Hillary Clinton for her use of a private email server while she was the Secretary of State.

The poll published on July 11 2016 showed that 56% of American adults disapprove of the FBI’s decision not recommend criminal charges against Mrs Clinton, while 35% said they agreed with the decision by the government agency. In March 2015, it became public that Hillary Clinton, during her tenure as the United States Secretary of State, had exclusively used her family’s private email server for official communications, rather than official State Department email accounts maintained on federal servers. Those official communications included thousands of emails that would later be marked classified by the State Department.

Some members of Congress have said that her use of the private server (and her deletion of nearly 32,000 emails that she and her lawyer regarded as private) violated State Department protocols and procedures. It also violated federal laws and regulations governing record keeping.

In May 2016, a State Department Inspector General report said Mrs Clinton failed to follow due process regarding the use of her private email sever for official communications. This report made many observers to expect that Mrs Clinton will be criminally charged for her actions. However, in early July 2016, FBI director James Comey announced that the agency would not recommend the Justice Department pursue criminal charges against Mrs Clinton for her use of a private email server during her term as Secretary of State.

The country’s Attorney General, Loretta Lynch accepted the recommendation of the FBI not to bring charges against Mrs Clinton. This seems to have put an end to a year-long investigation into the matter, which was likely to derail the presidential ambition of the former president’s wife.

57% of the respondents said the incident makes them worried about how Mrs Clinton might act as president if she is elected, with most very worried about it. Just 39% felt the issue is not related to how she would perform in office as president.

Among independent voters, 58% answered that the issue made no difference for their vote. But 33% said it made them less likely to support Mrs Clinton. According to the methodology used to conduct the poll, landline and cell phones were used to randomly sample 519 adults nationwide on July 6 and 7, 2016. The results have a margin of sampling error of 5 points. The survey was produced for ABC News by Langer Research Associates of New York City, with sampling data collection and tabulation by SSRS Research Institute in Pennsylvania.

The poll has confirmed many observers’ opinion that majority of the American public disagree with the FBI’s decision not to recommend criminal charges against Mrs Clinton.

Commenting on the poll, some commentators critical of the system in the country said the poll has showed that many of the government agencies do not work in accordance with the American public trust, but only protect the economic and political establishments of the country.

This article (New Poll: Majority of Americans Want Criminal Charges Against Hillary Clinton for Using Private Email) is a free and open source. You have permission to republish this article under a Creative Commons license with attribution to the author and AnonHQ.com.